When did the Germans find out about Auschwitz?

Today’s San Francisco Chronicle has a movie review by Mick LaSalle. “How the Germans found out about Auschwitz” describes the film “Labyrinth of Lies”, a German movie that chronicles a young prosecutor’s efforts in the 1960s to find out what really happened at the Auschwitz concentration camp and bring “thousands upon thousands of murderers and ghoulish sadists” to justice. 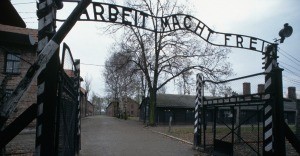 Rudi’s mother said only 20 people knew about the concentration camps; his father said more than 20,000 knew. This is the entry gate at Auschwitz.

We haven’t seen the movie yet, but LaSalle says the prosecutor soon finds out that no one (except his boss) in the West German hierarchy is interested in uncovering such shameful, horrifying unpleasantness. “They’d prefer to let the Nuremberg Trials stand as the first and last statement on the German culpability….The film presents what is, in many ways, a generational tug-of-war. The young prosecutor has no connection with the past, while his older colleagues – even the ones just 10 years older – want to sweep the war under the rug.”

Our experience, both in researching for our Stumbling Stone novel and in talking to people about this website and the book after it was published definitely laid bare most Germans’ reluctance – regardless of their age – to continue to confront the Nazi past.

Just last week, talking to a young German couple who now lives in San Francisco, we were told that the subject is “very controversial still.” And members of Rudi’s family in Germany, regardless of their generation, were quite upset when they first saw the website and learned that we’d written Stumbling Stone. They wondered why we had to rake up old history.

There’s a recently released documentary shot right after the war by the Allies liberating the camps, with the aim of insuring that the German people faced up to what happened.  It was never shown.  Worth watching.

What do you think?