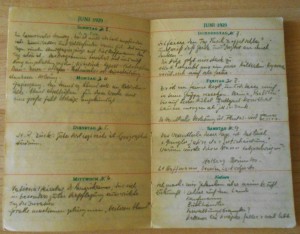 I have recently been looking through my father’s diary from 1945. It is a small paper booklet and contains writing in faded pencil. Some of it is written in the old German script which is almost impossible to decipher but some is written in the newer cursive. Some entries:
Saturday, June 9, 1945
I am starting to think how my professional future might look like: Teacher in a rural area; Salesman; Book seller; Public administrator? Waiter at my friend Knoepke, if he has survived.
Sunday June 10, 1945
We are being supplied with cold rations. The portions are larger than previously. The camp is slowly emptying out. The rumor is that the rest of us will be driven way tomorrow. Or perhaps we will be marched to a different camp.
Saturday, June 16, 1945
The rumor circulating is getting stronger: Saxony and Thuringia are being occupied by the Bolsheviks while the Americans are being pulled back. The rumor is persistent and I am devastated. The hope that I will see Gerda and our children ever again fades.
Next: How Rudi’s father was accidently released from the American POW camp