We Can Thank the Fuehrer for This

Mother’s Day this year coincides with the official end of World War II – May 8. And on May 16 of that year, eight days after the war ended, Stumbling Stone author Rudi Raab was born in Nonnewitz, Germany. 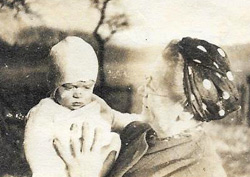 Rudi was left behind in Nonnewitz, Germany, with his grandmother

In the novel Stumbling Stone, Ingrid Schmidt tells Jewish reporter Sarah Stern about fleeing Dresden when she was nine months pregnant with Karl – Sarah’s lover.  Ingrid’s character in the novel is based on Rudi’s mother and this is her true story.

“We had it hard during the war, we women. When Dresden was bombed, we knew we had to leave. The Russians were coming. I walked for ten days, almost in a circle, to avoid the Russians.”

The first part of Ingrid’s walk, from Dresden to Pirna, was for naught. By the time she arrived there, Ingrid found the Russians had preceded her. So, still lugging her two little girls, she trudged on to Nonnewitz, where her parents lived. She was nearly nine months pregnant with Karl and Karl’s two sisters were still in diapers.

“One day I was walking by the side of the road. I don’t know how many days into my trek that was. I was pushing one of the girls in her baby buggy. You know, she had had polio and couldn’t walk. The other girl I carried on my arm, she had dysentery. And Bueblein here, he was a few days away from being born,” Ingrid spoke softly, remembering those difficult days.

Suddenly, a Russian soldier had stepped out of the woods onto the road. “He looked at me and then he slowly raised his rifle until it pointed at my head. I thought it was all over, that he would kill me and the children. Just then my younger daughter started to cry, I don’t know why.”

The soldier may have heard the baby cry. Whatever the reason, he lowered his rifle and then vanished back into the woods. Ingrid stopped talking and looked into the distance. Then she turned back to me and said, “Yes, those times were hard, especially for us women….”

“And then, Ingrid continued to talk about her flight from Dresden, describing the panic she felt, fleeing on foot, carrying her possessions on her back, dragging her children after her, artillery shells flying overhead. She talked about the terror she and the other women experienced when they considered what the Russians might do if they caught up with them.

‘Eight days after the war officially ended, I arrived in Nonnewitz, my parents’ village and asked someone to get help. I was already in labor. My father arrived with a hay wagon. A few minutes later, when we reached their house and I climbed into the bed my mother had just made for me, I said to my father, ‘We can thank the Fuehrer for this,” Ingrid recalled, sighing heavily. “Bueblein was born four hours later. It wasn’t easy.’

“The supreme irony of Ingrid’s flight was that shortly after she gave birth, in what she assumed was the American zone, the Yankees pulled out and the Russians moved in. Fearing she would be detained or worse, raped or murdered, she left Karl with his grandmother and fled again with the two little girls, determined to be in a safe place when her husband came looking for her. ‘He wouldn’t come to the Russian sector. The Russians would have sent him to Siberia,’ Ingrid said.”

Read Stumbling Stone for free on your Kindle in honor of Mother’s Day and the end of the war – May 8-12.