Right after we published Stumbling Stone, Rudi said several times that he thought we should translate the novel into German, since it is essentially a story about a German family and their history with the Nazis. 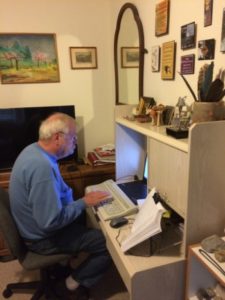 I was not very supportive about the idea. We didn’t know anything about book publishing in Germany—not that we had known much about the American market when we began our adventure as authors.  How would we market it? I asked.

Amidst our many book events in California starting in June 2015, we were too busy to think about shifting gears – and languages.

Then we crossed paths with Friedrich Edelmann and Rebecca Rust, musicians who live in Germany. Rebecca, a cellist, was born in California and is Jewish. She met Friedrich at a youth music event in Germany and they eventually married and are well regarded professional musicians. (They just played at a private birthday party for the Empress of Japan).

While they were visiting and touring on the West Coast here in the U.S., they suggested that we do an event together. They pitched the idea to Book Passage, an independent and wildly popular book store in Corte Madera, California. In August, we read from our book, for the first time focusing on the story of Gerhard—a German who resisted the Nazis. Friedrich and Rebecca chose music composed by Jews, including Hans Gál, who was forced to flee Germany and whose daughter is trying to gain recognition for him.

The August event went so well that Friedrich and Rebecca suggested we try touring in Germany. The idea intrigued us, although Rudi pointed out that we didn’t have a product—namely our book in German. And so began his current odyssey: transforming Stumbling Stone into Der Stolperstein.

Although we worked on the novel for nearly 25 years, Rudi says translating the book has forced him to become even more intimate with the language and the story of the book in a different way. He’s realized that simply substituting German for English word by word might create a book in German, but that isn’t what is called for. Many American idioms don’t work in German and he has to consider what the overall sense of the prose is to make it understandable. Words like antsy, wainscoting, piping (on a dress) and rave, even with online translation apps, present challenges he didn’t anticipate.

There have been some humorous moments where he’s had to grapple with sections of the novel that involve Karl Schmidt translating something from German into English for Sarah. And explanations about certain customs – lace curtains in windows – that German readers would take for granted – underscore how difficult it is to successfully capture an author’s intent and make text enjoyable in another language!

The good news is that he’s more than half way through the first round – and there will be several more as he seeks to smooth out the language, correct obvious errors and find better ways to express some phrases and concepts he struggled with.

And the even better news is that our German-born friend Sylvia has agreed to read the book to see what awful typos Rudi’s old German keyboard might have committed.

And most exciting is that we now also have a German editor who we hope will help resolve some of the dilemmas Rudi faced in trying to decide usage and German slang issues. More about our German editor soon.