Much has been written lately about the liberation of the Nazi concentration camps—Buchenwald, Auschwitz and others—and about the horrors the liberators came upon at those sites as the war ended. Lately I’ve been reading  letters my mother wrote when we lived in post-war Germany where my father was involved in resettling the camp survivors. I don’t know if most people realize that years went by before those poor souls found places to call home. 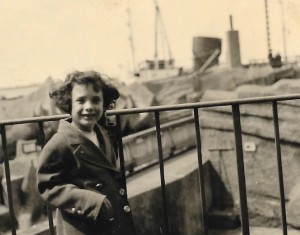 Julie in Bremerhaven, Germany, 1949. Many displaced persons departed from this seaport hoping for a better future.

My mother wrote in July 1949 or 1950 about some cousins on my father’s side who had survived and were now living in a displaced persons (d.p.) camp. My father had tried unsuccessfully to get American relatives to help them. One d.p. was getting married. “Abe (my father) said the d.p. cousins are a mess…he said he never saw such a sorry collection of people. How anyone could begrudge them or any other d.p. a little happiness is beyond me. You can imagine the wedding…they had it in their room in the d.p. camp…all of them live in one room, one bed over another, in rows.  After all their wanderings, aren’t they entitled to something?”

What is amazing about this is that by then, the war had been over for at least four or more years. And still people lived in deplorable conditions, stateless and neglected.  – Julie Freestone

Next:  A landmark is reached in resettling displaced persons.  And uncertainty about whether America will continue helping the refuges.