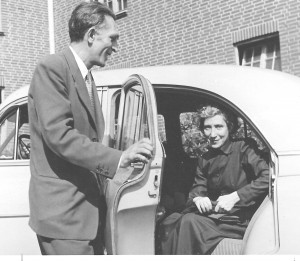 When my mother, Mathilda Gruber Conan, my older sister Laura and I went to live in Germany in 1949 —where my father Abe Conan was working to resettle concentration camp survivors— I imagine my mother must have felt very anxious. It was only a few years after the war. Everyone was on edge, expecting armed hostilities from the Russians. My mother was surrounded by German strangers she probably imagined had been Nazis; my father worked long hours; my 15 year-old sister was away at school and I was four or five years old. Here’s an excerpt from a letter she wrote her sister Clara (in the Bronx) from Bremen.
“Abe thinks I ought to come back with the children instead of moving to Hamburg. It’s worse there, from a safety point of view than in Bremen, which is bad enough. Hamburg is very near the Soviet sector border and it’s a port city, but it’s harder to get out of there than Bremen, which is also a port city. I really don’t know what to do. Meanwhile, I’m staying here and trying to make up my mind. I certainly hate to leave Abe here. He insists on staying until everything is finished. What a world…Europe is not a good place to be right now. Nothing’s safe these days, but Germany is one of the worst places…Everything is so uncertain. I guess I’ll be lucky if I get home at all.”
She didn’t leave my father and we eventually moved to Hamburg, where Rudi and I lived only eight miles apart—he as the occupied and we part of the occupation forces.