In reading through my mother Mathilda’s letters to her sister Clara in the Bronx, written when we lived in post-war Germany, there are many that deal with everyday life. My teen-age sister’s unhappiness with being away from her friends in the States, my learning German in first grade, my father’s stressful job. But besides these “normal” family issues, mother often wrote about the people who lived in Camp Grohn, the largest camp in Germany for displaced persons who survived the Nazis, sometimes the only ones in their families who didn’t perish.

I thought that people probably have heard enough of these stories but Rudi insists that people still need to hear them. Tell us what you think. 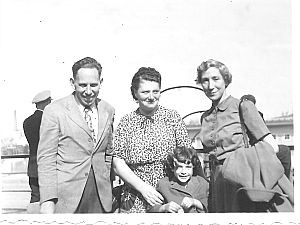 Mother writes about a family my father was asked by the head Judge of Military Government Courts in Bavaria to provide money and help to before they emigrated. My mother went to the military PX to get food and treats and took me to the ship to see them off. “They’re a lovely couple. The man is an artist and a dental technician. The woman wore short sleeves and had a concentration camp number branded on her arm. She was looking at Julie a long time and then started to cry and cry. It was very painful. Her little girl, aged five, was torn limb from limb in front of her eyes. Same age as Julie. The man’s eyes were so sad and lifeless, I really felt sick looking at them. No other child…”

On the way home from this heart-wrenching trip, my mother wrote, they stopped to greet a man my mother thought she recognized. It was not him but he told her his story. “From Warsaw. Everyone killed…a terrible tale. He met a girl in the D.P. camp and they’re married and now have a cute little boy. He has wealthy relatives in South Carolina and hopes to start a new life there.”

All these people -and she wrote about many of them and saw a number of them off to new lives –  somehow surviving ordeals most of us can’t even imagine, and having the courage and strength to have dreams of a new beginning in America, Israel or wherever they would be taken in. Heartbreaking doesn’t begin to describe it.