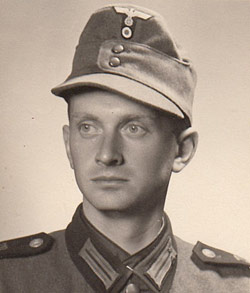 “It was May 1 and I was leading my unit south into Bavaria, hoping we could elude the Allied troops and make it to safety in the mountains,” he said as an introduction before starting to read aloud (from his diary).

‘I was riding in the sidecar of a motorcycle with my aide. It was very foggy. We almost missed the old farmer in the gloom. ‘

‘‘You. Have you seen the enemy nearby?’ I asked him in a low tone, squinting to see him.  He was dressed in shabby clothes and carried a long staff.’

‘Ja. The enemy is all around us,’ said the man, not bothering to stop.” Where he was going, Der Alte said wasn’t clear, but he surely had no intention of lingering to talk to a German officer.’

‘Reaching the top of the rise, I motioned for the aide to turn off the motorcycle. We coasted down the hill silently and when we reached the bottom, the fog parted and there, before us, was an American tank. ‘

‘The soldier at the top lowered the machine gun with one motion, fired a burst in our direction, killing my motorcycle driver instantly. But because we were so close to the tank, the machine gunner could not lower his weapon enough to shoot me’.”

“Swinging his legs over the edge of the sidecar, he threw down his gun, put up his hands and there, in the Bavarian countryside, with the mist dripping off his helmet, the war ended for Friedrich Schmidt.”