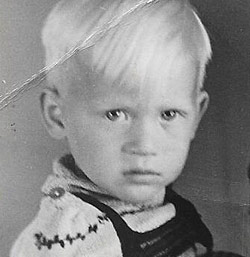 I remember the times I lived in Kiel at the Baltic sea. The town had been destroyed during many bombing runs and survivors had to become creative with living space.

In 1947 we lived in what had been the attic of an apartment house. My father constructed two rooms of wood salvaged from other destroyed buildings.

When I was about three, I was allowed to go out to the street to play with other children. On the first floor of our building was a pub. One day  I noticed a delicious aroma coming from its door. My eyes were about the height of the keyhole so naturally I peeked through.

I saw all the kids from the block sitting at the tables and eating. I smelled old beer and stale tobacco smoke mixed with the scent of warm delicious food.

My own lunch had been hard heels of bread that had been softened by soaking them in ersatz barley coffee. That was mostly what we had to eat each day. I don’t remember how long it was until we had “real” food.

Since there were no children to play that day with I went back upstairs and asked my mother why my sisters and all the other children were eating in the pub. She told me that that was boerne bespisning—food provided for the children by the Danish people. She also explained that I was still too young to participate. They never came back with more food.