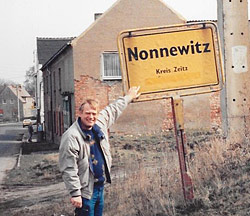 Rudi points to the sign of the town where his mother – like Ingrid in Stumbling Stone, found refuge when WW II ended

“Ingrid continued to talk about her flight from Dresden, describing the panic she felt, fleeing on foot, carrying her possessions on her back, dragging her children after her, artillery shells flying overhead. She talked about the terror she and the other women experienced when they considered what the Russians might do if they caught up with them.

‘Eight days after the war officially ended, I arrived in Nonnewitz, my parents’ village and asked someone to get help. I was already in labor. My father arrived with a hay wagon. A few minutes later, when we reached their house and I climbed into the bed my mother had just made for me, I said to my father, ‘We can thank the Fuehrer for this,’’ Ingrid recalled, sighing heavily. ‘Bueblein was born four hours later. It wasn’t easy’.”