I came across a letter today written by my father, Abraham Conan, to my aunt, Clara Gruber. He was in Hamburg, Germany; she was in Bronx, N.Y. It was July 31, 1950 and he had been recently transferred – as part of the U.S. Displaced Persons Commission – from Bremen. The current plight of thousands of fleeing refugees reminds me of what he wrote about his new responsibilities. He was charged with helping the survivors of the Nazi Holocaust who were now living in Camp Wentorf in the British-occupied zone settle in the U.S. and other countries. 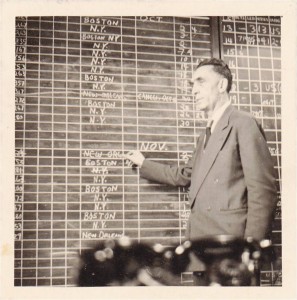 “There’s a terrific amount of work in my new assignment at Wentorf. I start here with a number of acute problems – a tremendous back-log of cases that need further work to finish them, and a serious shortage of personnel. The early solutions of these problems involves thousands of people in the British Zone, which is now my responsibility. I hope all goes well.”

I had previously researched Camp Grohn, where my father had been from 1948 until 1950 and learned it was the largest of the camps where landless survivors were housed as immigration was arranged. Looking for information about Wentorf, I found this very moving description of someone born at the camp (she emigrated to Canada just before my father arrived there). http://www.dpcamps.org/wentorf.html

It is still almost impossible for me to grasp the fact that after sometimes years of privation and torture, people who miraculously survived the Nazi concentration camps were still housed in sub-standard living conditions, waiting for resolution and a new life.