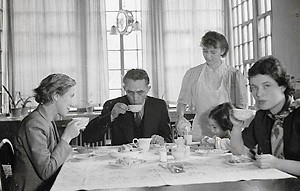 Julie (child on the right) and her family in their German apartment.

People ask us what we remember about the post-war years in Germany. Of course, Rudi and I have different memories. My father was part of the Allied High Commission – the occupation forces. Rudi and his family were the “occupied.”

We had lived in a small two-bedroom apartment in the Bronx, N.Y., until my father was promoted and dispatched to Germany to help with the resettlement of the concentration camp survivors and other displaced persons. The first year we were in Germany, we lived in Bremen, the British occupied zone.

I remember walking to school – I’m sure I wasn’t alone – past street after street of rubble. Bombed buildings, one after another.

And I remember the food we were given in school. Me, a very fussy eater and thoroughly spoiled kindergartener, forced to eat grapefruit sections mixed with condensed milk. The milk curdled. We all ate it silently.

Only recently have I realized how close starvation was for our allies and our enemies. But not those of us on the home front in the States.