Can We Hope for Never Again ?

What followed was so horrifying that it is almost impossible to image, including a whole nation’s inability or unwillingness to understand what was happening to them and to stop it.

As Hitler transformed Germany into a frightening dictatorship, he built both political and physical structures to support his unchecked lust for power and control. 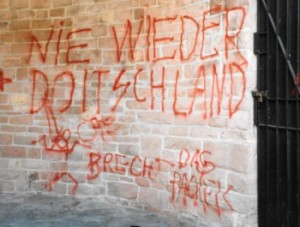 “Never Again Germany” is the graffiti on the wall at the Tingstaette in Heidelberg, Germany

In our novel Stumbling Stone, we talk about one structure Hitler built to serve as a backdrop for the speeches he and his leaders delivered to spur Germans to support him. Here is an excerpt from that part of the novel:

I knew that Karl wanted to show me the cloister (in Heidelberg) but he had never mentioned the Tingstaette—he must have thought it was pretty important if he was choosing it instead. When I asked what it was, Karl explained it had been built by the Nazis as one of their places to stage rallies. It had only been used once or twice, but had never been removed. . .The Tingstaette was a truly unnerving place. Built of huge stone blocks in a half circle for a huge audience, it had a stage for the orators. Towering over the city, with a breathtaking view of the Neckar Valley, it should have been a picture post-card scene, but the feel of evil was everywhere. Even though it was deserted and overgrown with weeds, I had no trouble as we walked around envisioning thousands of jack-boot wearing Nazis shouting “Sieg Heil” as they stood listening to frenzied speeches. The only reassuring part of the scene was the graffiti that had been painted on the walls. “Nazis Raus” and, in German, “Never Again, Germany.”

And thinking of those years – the rise of the Nazi regime, the construction and use of the concentration camps, the destruction of whole villages and families – we have to hope that the world remembers what gave rise to that horror and also says “Never again” to a leader who spews hate and intolerance