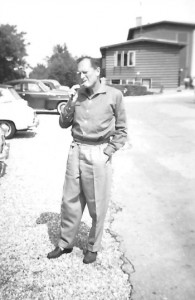 In our novel Stumbling Stone, we tell the story of Gerhard Schmidt, a young man growing up in Nazi Germany.  In one scene that takes places in Leipzig, Germany in 1934, Gerhard listens to his father and brother, an avid Nazi, talk about what was being done to destroy the opposition.

“We got to the pub and crashed through the front and back doors at the same time. …Die Commie pigs,” we screamed, broke tables and chairs before anyone could move and started cracking their heads. They ran like rabbits. The pub is in ruin.”

The past meets the present

This week, a political rally in Chicago for Republican presidential candidate Donald Trump was cancelled because too many anti-Trump activists had invaded the event. At a subsequent event, two anti-Trump protesters stormed the stage, causing Secret Service agents to shield Trump with their bodies. At an earlier event in North Carolina, a Trump supporter sucker-punched a protester.

In February, after a protester was punched, Trump said his audiences should “hit back” and announced that he’d like to punch a protester in the face. After the Chicago event, Trump urged his supporters to “ organize and fight back” and offered to pay the legal fees of those who did if they were arrested.

My father and the Storm Troopers

As I watched the latest event on the news I remembered one of the talks I had with my father when I was about 14 years old – which became the basis for the scene in Stumbling Stone. After I told him about a lesson in my high school about the months and years that preceded the take-over by the Nazis of democratic Germany, my father’s eyes lit up.

“You know In those years I was a member of the S.A. The Nazi Storm Troopers. We battled the Socialists and Communists at that time. I remember that we marched in tight formation into their neighborhoods. We carried flares, which looked very festive at night but whenever a Socialist protester came too close we just stuffed the flares into their face. This was very effective.”

My father said that when the riot police, mounted on horses, showed up to break up the melee, he and the other storm troopers ripped stakes from a wooden fence and threw them across the ground, spinning like helicopter blades. The horses always shied and bucked and threw the police officers off.

“So then you had scared riderless horses running around and ill-equipped police on foot. This always worked.”

Creating a cult of personality

So when Donald Trump urges his followers to organize and fight back, is he urging them to relive and descend into the chaos the brought forth the Third Reich?

In his weekly column in the San Francisco Chronicle, former U.S. Secretary of Labor Robert Reich, now a professor at the University of California, Berkeley, says, “Viewing Trump in light of the fascists of the first half of the 20th century – who used economic stresses to scapegoat others, created cults of personality, intimidated opponents, incited violence, glorified their nations, disregarded international law and connected directly with the masses – helps explain what Trump is doing and how he is succeeding. It also suggests why Donald Trump presents such a profound danger to the future of America and the world.”

And it explains why our German family, talking about Trump and his speeches, ask us if we’ve forgotten history and Nazi Germany.