Depravity is Hard to Conjure

People often ask us how much of our novel Stumbling Stone, which is based on our real life stories, is true. We usually explain that most of it is fact but the part about Gerhard – the rebellious German, is the most fictionalized.  We’ve had to imagine the brutality he was subjected to and sometimes readers tell us they almost couldn’t read Part III of the book.  It turns out our imagination and the research we conducted didn’t come close to completely capturing the unspeakable horrors Nazi victims experienced.

The Forest of Death 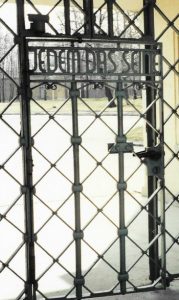 The gate at Buchenwald says “everyone gets what he deserves”

Rudi just read Ernst Wiechert’s Der Totenwald—The Forest of Death— about the Buchenwald concentration camp where Gerhard spent two years. The book was a gift from new friend Bob Heller, the author of the biography The Unlikely Governor.

Author Wiechert was a German teacher, poet, speaker and author critical of the Nazi regime who had the courage to speak out critically about the “ethics” of the Third Reich. As a result he was arrested by the Gestapo, the Nazi secret police. Without a trial and after 14 hours of interrogation he spent weeks in jail until he was informed that he was to be sent to a concentration camp.

Once in Buchenwald, he was detailed to the quarry where 17-70-year-olds had to carry 40 pound rocks on their bare shoulders for one kilometer uphill for 13 hours a day in 90 degree heat without a break and were not permitted to drink water all day long. They were beaten mercilessly when they fell and were shot if they could not get up. Sometimes the SS guards used them for target practice.

The book describes how the slave labor was systematically dehumanized and worked to death and how the prisoners were brutalized and humiliated. Twice a month they were permitted to write a postcard or short letter and were instructed to always write that they are being treated well and could buy anything they wanted in the commissary. They were also instructed to ask their families to send money.

After his release, Wiechert left for Switzerland, where he could write freely. Probably the fact that he was in Buchenwald for only two months saved his life.

What Gerhard Tried to Say

In our book we described a short vignette about Gerhard’s treatment and his feeling of loneliness when his father seemingly doesn’t understand the coded letters where he tries to report his torture. “Now standing in the early morning chill at the endless roll call, Gerhard wondered with little hope whether there could have been a hidden message in his father’s letter. If not, his father, in fact, had told him: ‘what has happened to you is none of my concern. If you need help, help yourself.’”

When we wrote this we had only a vague idea of how the SS killed their victims through brutal torture. The imagination and the scant information are poor instruments to portray the depravity of the SS guards in the camps and the overpowering inhumanity that became commonplace.