Skinheads at the Ovens

A while ago, we wrote about the oath people took in 1945 at the newly liberated Buchenwald concentration camp to ensure the Nazi atrocities were never forgotten. With all the anti-immigrant talk and xenophobia that we are being exposed to, the oath seems to have fallen on deaf ears.

This excerpt from an early draft of Stumbling Stone didn’t make it into the final version of the book, but it did happen to us— the authors of Stumbling Stone—and was part of the our impetus for writing the novel.

“Suddenly, below, near the entry gate, she (Sarah Stern, the Jewish reporter who narrates Stumbling Stone) heard a commotion and turned to see a group of people bearing down on her, all dressed in similar clothes—black jackets, black boots, close cropped hair. Laughing loudly, the group came closer, throwing snow balls. They were speaking English and she concluded they must be American military. “Why,” she wondered, “didn’t the military teach their young soldiers better manners and more respect?” She thought she overheard one of they say, “When the Jews didn’t eat, they threw them in here,” but they weren’t quite close enough to be sure. 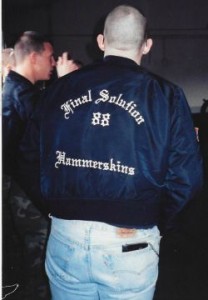 As they came nearer, Sarah began inching away. They were big, muscular men, oblivious to her. She thought they would have stepped on her if she hadn’t moved out of their path. When they pushed their way into the building from which Karl had yet to emerge, she caught sight of the back of their black jackets. “The Final Solution,” they all said.

Her brain seemed to slow down, not processing the information it was receiving. “The Final Solution” was the Nazi’s slogan for the annihilation of all Jews, but what was it doing here, at the concentration camp in 1990, emblazoned on an American serviceman’s jacket? “How,” she thought to herself, feeling the rage building, “could an American military unit allow its men to nickname their detachment something so insensitive?”

Sarah thought to confront the men, demand to know why they had chosen that name, what they were doing here, laughing and talking loudly. She looked around her, conscious of her isolation and the almost-menacing behavior of the group.

As she waited for Karl, Sarah began composing letters in her mind to the Department of Defense demanding that they discipline their troops. She watched the group covertly as they pushed their way into the building, their boots pounding on the floor.

By the time Karl came back out, ashen and dazed by what he had seen inside the innocuous-looking red-brick building, Sarah was mumbling to herself. “Obscene, dreadful, disgraceful.” She insisted upon dragging Karl back inside to show him the Americans. 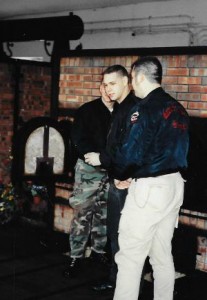 American Skinheads inside the crematorium at Buchenwald 1990

They came upon the men in the last of the three rooms. Sarah was too intent to realize immediately that they were inside a crematorium and in fact standing in the very room where the Nazis had incinerated their victims. The group was standing in front of the brick ovens, posing for photographs, with big smiles on their faces, in front of the wreaths that had been laid there for the dead.

Sarah was still muttering about American military, but Karl grabbed her arm and began pulling her away. “They’re skinheads,” he said. “We have to get away from here.” They staggered out. For Karl, the picture of the ovens was uppermost in his mind. He was still sickened by his face-to-face confrontation at last with what could have been the instrument of his uncle’s death.

On the way out, they passed several visitors staring dumbfounded at the spectacle of the Skinheads against the brick ovens.