To the Victor Belong the Spoils? 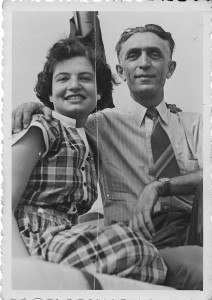 Julie’s sister Laura and her father Abe Conan at a yacht race on the Weser River, August 1950.

When Julie’s family moved to Germany in 1948 so her father (Abe Conan) could supervise the resettlement of concentration camp survivors and other displaced person, they moved from a two bedroom apartment in a Jewish neighborhood in the upper Bronx to the American occupied zone in Bremen, Germany. Here Julie’s mother describes to her sister what life was like in those post-war days in Bremen for the Occupation Forces.

“Last night when we came home, Abe, Laura (Julie’s older sister) and I were summing up our life in Germany. Whoever would have thought a few short months ago that Abe would be standing in the middle of Camp Grohn (the largest camp for displaced persons – dps) being snapped with Senators Homer Ferguson, Baldwin and Hunt, front-page men, being asked questions about the dps; also, the way we ride around all day, covering the British Zone, French zone and American, meeting all kinds of nationalities, hearing all kinds of languages, seeing the little old villages you read about all your life; also the parties…formal with champagne flowing and private orchestras and Laura sipping cocktails in an evening gown; Julie in the Stork Club dancing with Abe.”

“Also weddings in castles, cocktail parties where you meet people from everywhere, from consulates, Red Cross, Army, Navy, Military Government, the house, the help, the service…cocktails before dinner on the roof of the Haus des Reichs (the military government building in Bremen) under the starts, people from all over the United States here; the friendships with the English people now and then, one or two French, the hours we keep, starting out for parties at 11 or twelve, calls from Washington to Abe all weird hours, the strange attitudes of people.”