At a trip to a local jewelry store last week, I was asked a question that took me back to another century and another country. 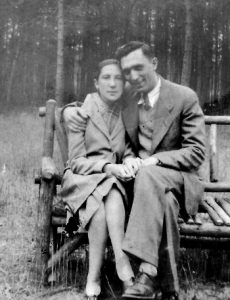 A few week ago I began to consider what to do with my mother’s wedding ring. She died in 1953 when I was eight years old and when I was a teenager, the ring became mine. Just a gold wedding band with no markings or dates engraved on it. (In our novel Stumbling Stone, Sarah Stern’s mother is still alive and talks to her. The character is based on Julie’s mother.)

I think I assumed that when I married, I would use the ring but for reasons I no longer recall, I chose a brand new band for each of my two marriages. My mother’s ring, wrapped in crumbled paper, spent the next five decades in a felt pouch I made at summer camp.

Every now and again I would come upon the ring. I had a son— not a daughter I could pass the band on to— and when he got engaged more than fifteen years ago, I might have  offered it to him but he and his bride-to-be had other ideas.

Nearing my 72nd birthday and being involved in a group that explores how to age healthily, I’m more aware of mortality and end-of-life issues than I have been. We’ve talked about de-cluttering, wills and treasures we can’t part with.

Not that I would have considered giving away the ring. But what to do with it?

Rudi and I have been together for 26 years. We aren’t married.  I do wear a wedding-like ring on my left hand. It has blue and white stones in it.  My friend Janet has a matching ring with red stones and Kristen—her daughter and my surrogate daughter—has one with green gems. We consider those rings to be symbols of our life-long friendship.

Kristen and Janet both encouraged me to have the gold band resized (my mother was tiny and I’m not) and start wearing it on some finger on either hand.

Is it from the old country?

So with that I mind, I went off to the local jewelry store; the owner, from a family of immigrants herself, knows us and a bit of our histories. She squinted at the inside of the ring and said, “No markings but it isn’t 14-carat gold.  Maybe 18.  Is it from the old country?”

I laughed and said, “Oh no. My parents were married after they immigrated. In 1929 I think. During the depression.”

But then suddenly I wondered. Where had that ring come from?  How had they, nearly penniless, been able to afford a gold ring?  I never knew my grandparents.  Maybe it had belonged to one of my grandmothers?  Maybe it was from the “old country.”

I pictured my mother, the youngest child in her family, leaving the shtetl—the small village she was from in the Austro-Hungarian Empire—sometime around 1910. Had she been given the ring to take with her, one of the few keepsakes she would carry through life?

She’s dead and so, now, is anyone who could have answered my questions. So many stories lost through immigration from Europe and then to the Holocaust and death that comes eventually to all of us.

When I wear the ring, I’ll think about who might have worn it before me. And where.