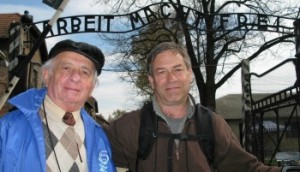 Jack Adler (left) is featured in the movie, Surviving Skokie. His son Eli Adler co-directed it with Blair Gershkow

A film I saw recently reminded me that there are still powerful lessons to be learned from the past about the importance of speaking up when we see something intolerable.

Jack Adler, the subject of the film Surviving Skokie, told a sold-out audience at the San Francisco Jewish Community Center, “don’t tolerate any kind of racism.”

Adler, a soft-spoken man who still speaks with a Polish accent, survived the Dachau concentration camp and a death march, but lost mother, brother and grandparents in the Jewish ghetto of Pabianice, Poland, his younger sister in Auschwitz and his older sister in Bergen-Belsen. He emigrated to the United States as a teen-ager and eventually married and settled in Skokie, Illinois, a suburb of Chicago.

He was in San Francisco with his son Eli Adler, who co-directed the film with Blair Gershkow; the work was billed as a “Heartwarming Story of Community, Transformation and Discovery.” Surviving Skokie describes what happened in the 1970s when a group of Neo-Nazis tried to march in Skokie. The hate-group had targeted the community because of its unusually large number of Holocaust survivors. 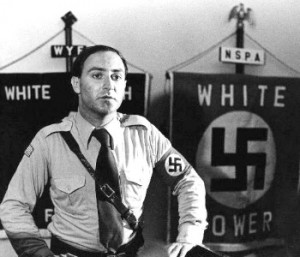 Before Frank Collin, the leader of the group, came to Skokie, the survivors were mostly silent about their past. Eli Adler says he knew his family was different because he had no grandparents, no aunts and uncles, no cousins and there were other kids in Skokie like him. “They were making a shetl (small Jewish village) again,” Eli Adler says about the cluster of survivors in Skokie. But they never talked about their families’ histories until Collin arrived.

The films traces how the Jewish Defense League and the survivors fought back, sometimes physically, to keep the Nazi group from marching. In a strange twist, Collin’s right to demonstrate was defended by the American Civil Liberties Union and specifically by a Jewish lawyer. The film says Collin told that lawyer, “Don’t think just because you are representing me free of charge that when we take over this country you won’t be the first one to go to a gas chamber.”

After the film was shown and it was time for audience questions, Jack Adler was asked how the Holocaust survivors in Skokie felt when Collin and his group goose-stepped into Skokie. “It was beyond comprehension that survivors could come to a land of freedom and be confronted with this,” he said. “People were mystified about how our nation could allow this happen.” So after a lifetime of silence, the survivors realized they had to speak up and say, “Not here, not now, never again.”

Asked whether he saw similarities in some of the recent events in the U.S., especially around the 2016 campaign, Adler said, “There are sad parallels to today. We’re all in shock as we watch the news. Humanity didn’t learn much. Hopefully humanity will learn mutual respect.”

And I was reminded again how important it is to keep telling these stories so no one forgets what can happen when a demagogue is allowed to go unchecked and unchallenged.

Read more information about the movie