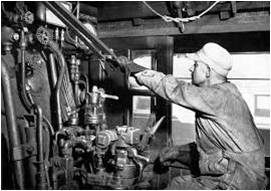 My father’s diary describes his days in the American prisoner-of-war camp. This excerpt from Stumbling Stone was gleaned from the diary and interviews with my father.
“How long did you stay in that prisoner-of-war camp and what was it like there?” I asked, thinking of Buchenwald, Bergen-Belsen, Auschwitz and the other camps, determined not to feel a scintilla of pity for whatever he said.

“It wasn’t pleasant. We were all in a big field. It was damp and soon we all had bladder problems. There wasn’t enough food. But I was able to read books shared with other prisoners and write in my diary and even sometimes get messages from the outside.” He was silent for a short time, maybe remembering that field or perhaps trying to decide whether to continue his story.

“I probably would have remained there, or in another prison for a good long time,” he said. “After all, when I was leading the school in Sonthofen, my superior was Baldur von Schirach. He was the Education and Youth Minister and was accused by the Allies of misleading the German youth. He was tried and convicted at Nuremberg. But an ignorant mistake by the Americans allowed me to go free.”

“What happened?” Karl asked, apparently forgetting for a moment that he had vowed only to translate. Maybe because Der Alte seemed so comfortable telling the story, Karl was able to think just for a moment that perhaps there really were no terrible secrets to hide and that the old man, after all, had been nothing but a regular soldier in the German army.

“We were all asked to complete a form, describing what we had done during the war. I didn’t think it was worth concealing what I had been doing, because I thought they would find out anyway, so I completed the form truthfully. I said I had been a Hauptbannfuehrer.” 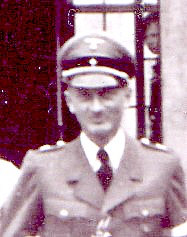 This is my father, the Hauptbannfuehrer

I stole a look at Karl to see if he was responding to that information with horror or surprise. He didn’t look either shocked or amazed; I assumed he knew what that rank signified.

“I expected they would transfer me immediately to another, more secure prison or question me, because already we had heard about the Allies’ plan for some kind of war trials,” Der Alte continued. “But instead, to my surprise, they told me their major priority was getting the infrastructure of the country, including the trains, going again, and since I was a railroad official, I was free to leave.”
The old man began laughing, a feeble laugh that made him clutch his chest. I was confused. Why had the Americans made such a ridiculous mistake?

Karl explained to me. “You see, the word for train is Bahn, not bann, but the Americans obviously misunderstood, so they let him go.”