A Vow to Destroy Nazism at its Roots

Our Stumbling Stone editor Elizabeth Rosner (her new book is Electric City) shared with us the material she and her father Carl H. Rosner received when they attended the 70th anniversary of the liberation of the Buchenwald concentration camp in April 2015. Liz’s dad was Prisoner #38156. 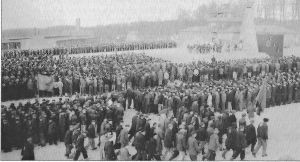 Among the brochures, I came upon a photo of the liberated inmates standing on the “muster” ground at the camp on April 19, 1945, where they swore this oath, “We will not end the struggle until the final culprit has been brought before the judges of the nations! The destruction of Nazism, down to its roots, is our motto. To build a new world of peace and freedom is our goal.”

The caption points out that the crematorium is visible in the background of the photo on the left, the camp gate (which is part of the front cover of Stumbling Stone) is on the right.

The vow those survivors took in 1945 is still to be completely fulfilled. We don’t live in a world of peace and freedom. There are still refugees fleeing from oppression. And in a blog that will appear shortly after this one, you’ll read a story that didn’t make it into Stumbling Stone but that its authors experienced at Buchenwald that was part of the impetus for writing the novel. Nazism may be destroyed, but the roots still remain in painful and dangerous forms.