In Part II of the novel Stumbling Stone, Karl Schmidt’s father tells reporter Sara Schmidt and Karl about the day he was captured by the Americans at the end of World War II.  That account is based on the true story of Rudolf Raab, Sr.’s capture on May 1, 1945 in the Bavarian forest. This week, our friend Elizabeth Hack sent us a San Jose Mercury News clip with the headline “110,000 Liberated Prisoners Celebrate,” dateline Moosburg Prisoner of War Camp, May 1, 1945. 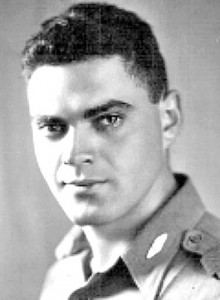 The article explains that that 30,000 of the prisoners at Stalag7(a)
were freed by the U.S. 14th Armored Division and “the remaining 80,000 rapidly overcame their masters and were free after four years of serfdom.”

Stars and Stripes
Describing the scene, reporter Larry Newman says, “A walk down the main street of this barbed-wire city is the emotional experience of a lifetime. The Stars and Stripes flies over the sector of the camp housing 14,891 prisoners from every campaign of the European war.”

And here is where our friend Liz Hack’s father comes in. “The first tanks to enter the camp were commanded by Lt. Sidney Hack of Brooklyn N.Y. and Lt. Perrie Waters of Carson City, Nevada. They raced to the administration building in the center of the camp and ran up the American flag on the pole where the Nazi swastika had flown only a few moments before.”

One prisoner, Lt. James Roberts of Canton Ohio said, “We hadn’t seen an American flag for so long that when the flag went up it was like a new life running into your veins.  Men who had forgotten how to cry and men who hadn’t laughed or spoken above a whisper for months yelled.  God only knows what a thrill it was.”

In fact, besides Stalag 7(a), Newman says “the entire area around Moosburg is one giant prisoner of war camp and every village has at least 1000 prisoners working in shops and farms freeing German men, women and children to fight for Hitler.”

While they were freeing the Allied prisoners, the American military took 6000 prisoners, “including 50 9 and 10-year-old German boys, uniformed and armed. They also captured numerous women wearing the Nazi uniform and carrying the regular Wehrmacht arms.”

In his diary, found by the authors after Raab Sr.’s death, he wrote on that day,  “The only thing that keeps me alive are my wife and children. What has happened to them?  Perhaps they have been able to reach Leipzig or Nonnewitz where they would be in tolerable conditions. And perhaps they will take into consideration that she has small children and they will not take her into custody.”

He then records, in a box with no comment, “Hitler dead.”

And on May 2, he wrote, “I now wish to start a new life with Gerda and the children, although I have no idea how this could be possible and what that would look like.”

In fact, he remained in an American POW camp for six months until he was accidentally freed.