We Can All Bear Witness

Recently a non-Jewish physician who did his residency at the Jewish General Hospital in Montreal, Canada, described his profound and moving experience working with a group of Holocaust survivors.

Writing for the Bay Area News Group, Dr. Alan Bonsteel explains that in 1991, when the Iraqis fired Scud missiles at Israel, concentration camp survivors in Montreal experienced extreme anxiety. It was suggested that as part of his residency, Dr. Bonsteel lead a support group to help them.

At first, he demurred, pointing out he wasn’t Jewish and at the initial session, his concern seemed justified; the survivors were “outraged, horrified and insulted that they had been sent a goy.” 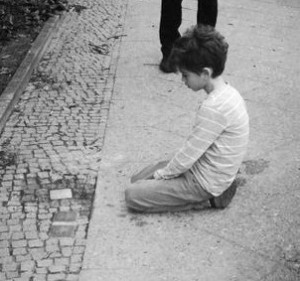 Gunter Demnig, the creator of the Stolpersteine project tweeted this photo of a child viewing a stumbling stone. Demnig calls the stones the “world’s largest decentralized memorial”

But at the second session, one of the group said he thought it might be a good thing that the doctor wasn’t Jewish. “So many people can’t believe what horror we went through and the millions who died so pointlessly. If a non-Jew witnesses for us when we’re gone, maybe they’ll believe him.”

The impetus for writing the essay, Dr. Bonsteel explains, was the death on February 19. 2-16 of the last known survivor of the Treblinka concentration camp. “It won’t be too many years before we read in the newspaper that the last known Holocaust survivor of all has died,” he said.

A Call to Action

His column has a call to action that we all might heed. “Especially now, when the world is beset by racial and religious intolerance that makes many wonder if the human race has learned anything at all, we must remember those millions who died so needlessly and pointlessly. We must never forget the inhumanity of which mankind is capable.’

We’ve asked in the past whether retelling stories from that period is still important and we’ve been repeatedly told it is necessary. One person commented “They (the stories) absolutely need to be told. I remember my mother calling into a radio show when I young. So many callers believed the Holocaust never happened. She said she would continue to tell the stories she knew in hopes of the same never happening again.”

And another person said “hell yes!… If these stories are not preserved then the history disappears….sadly disappears and it was all for nothing.’

So that a New Generation Could Arise

In the book Vienna Revisited, by Freda Ulman Teitelbaum, who waited four decades to return to a city from which she and her family were driven by the Nazis, she says something really profound. “From time to time, the same question arose to haunt us: why we were saved, why were we the lucky ones to survive? The only answer to this enigmatic question would be that we were meant to live so that a new generation could arise from the ashes of the old, with the hope that they would inherit a better world, and that they would never forget.