So Many Years of Waiting

The San Francisco Jewish Film Festival showed an appalling documentary filmed by the Allies as the concentration camps were being liberated after the war ended in Europe in 1945. The film presented a graphic story of the condition of the survivors. As I’ve written before, I’m struck by the fact that hardly anyone seems to talk about what happened to those people who were liberated and how long it took them to find new lives. 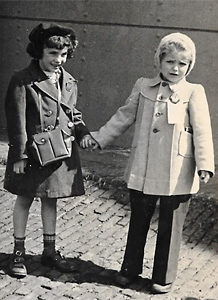 My father, Abraham Conan, was involved in resettling the camp survivors and other displaced persons (DPs) from 1948-51. It’s shocking to me that there were still people – homeless, landless and penniless even then. In nearly every letter my mother Mathilda wrote her sister Clara in the Bronx, she describes the plight of the DPs. Here are two excerpts:

“The d.p.s are the unfortunate ones. The only humanitarian thing to do is to send them out (to other countries) as quickly as possible. I was happy when Camp Grohn (the largest d.p. camp) was filled almost to overflowing. And I was quite disturbed the last week or two when Grohn population fell from around 5,0000, near which mark it should be steadily. We have a pretty heavy shippping schedule which is supposed to become even heavier. The serous drop in our Camp Grohn population (that is the people coming in here from all parts of Germany and Austria) was the reason for the call to Abe from Washington. (Written in the winter of 1948?)”

“Last Sunday, we had a thrilling time. A large group of people came from Frankfurt to see a boat off. On the boat was the 20,000th d.p. to sail from Germany. There were reporters and cameramen from the Stars and Stripes….We took the children and Julie shook hands with the 20,000th d.p., a little girl just her age.” (April 25, 1949)