What if the Dead Had Survived?

Just a few days ago, we were reminded that June 8 was an anniversary we might want to remember. In 1944 on that date, the invasion of Normandy – and the winding down of World War II – began. 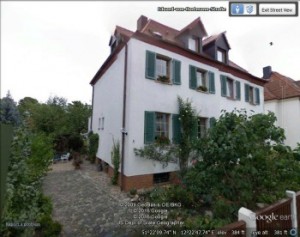 Would the real Gerhard have returned to his father’s home in Leipzig, Germany if he had survived the war?

The stories we read set us to thinking about what would have happened if some of the people had perished during World War II were still alive.  And then recently, a friend gave us a copy of a book written by a German, non-Jew who survived the Buchenwald concentration camp.  The book is called Der Totenwald – The Death Forest.

Stumbling Stone is a fictionalized literary memorial to one German who didn’t survive Nazi torture.  He died in 1941 at age 21.  A rebel who wouldn’t go along.  What if he had lived to be liberated?  Where would he have fit into German society?  Would he have become an artist or a teacher?  Would he have remained in Germany or emigrated to a country like the United States where there might have been more tolerance for different opinions and life styles?

The other character in our novel – Sarah Stern’s mother – tells Sarah stories about life in post-war Germany and the plight of the immigrants who were forced to live in displaced persons camps, not so far removed from the conditions in the Nazi concentration camps. Cramped, traumatized and uncertain about the future, some lived in those resettlement locations for years before being admitted to other countries.

What would Mrs. Stern, a character based on Julie’s mother, see a connection to the refugees fleeing Syria and other war-torn countries? Would she want to open her heart to them, believing their goals were similar to the victims of the Nazis:  a safe haven, a better life for their children, religious freedom.

We had the luxury in our novel, which is based on our real life stories, of having Mrs. Stern speak to Sarah, her adult daughter. In fact, that dialogue is based on letters Julie’s mother to her sister from post-war Germany. Julie’s mother died in 1953 and there were never adult conversations between her and Julie.

And Rudi’s Uncle Gerhard, the basis for the victim in our book, never was able to tell his story, except through a few post cards that survived the war. We have to assume that if word had reached him that the Allies were winning the war, he would have rejoiced that the end of his torment might be at hand.  And perhaps he had a dream of what his life might be like as a free man.