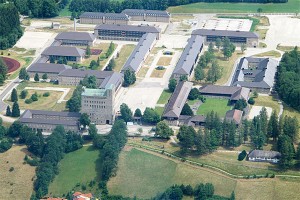 Aerial view of what was the Adolf Hitler Schule in Sonthofen, Germany

Flying Over My Father’s Past

Last week I was in Germany for the occasion of the 70th birthday of my cousin. While I was there, I took a flight in a single engine airplane along the rim of the Alps. I could have gone anywhere but decided to take a look at Sonthofen, the school my father ran where the Nazis trained the next generation of leadership during the 1940s.

As I was snapping pictures out of the canopy of the plane, I remembered arriving at Sonthofen during my childhood. There was an imposing tower with a gate underneath. I was just 12 years old and on the way to vacation in Italy, my father suggested we take a look at the school. At the gate was a guardhouse with a German soldier. He made us stop. My father told the soldier that he came to show us around. The soldier replied that the area was off-limits to civilians. My father replied that he used to be in charge of the school. The soldier suddenly snapped a crisp salute and promised to return in a minute.

He retreated into his guard house and had a brief telephone conversation with someone. When he returned he politely told us to pass through the gate and park our car. A short while later a high-ranking officer arrived and greeted us and saluted my father. As he began to show us around, I overheard their conversation. The officer asked my father when he had commanded the school.

My father truthfully told the officer that he had been in charge when it was still an Adolf Hitler School. At that point the conversation turned frosty and we were quickly ushered out of the complex.

Many years later I saw the movie “Before the Fall” (the German version is called “Napola”). To my amazement the opening scene depicts the assembly hall of the school in Sonthofen. The actor who plays the school’s director looked like an older version of my father; it was spooky.