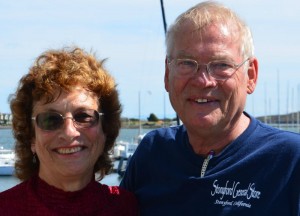 Rudi Raab and Julie Freestone, authors of the book Stumbling Stone, share a little of their personal histories. Given the enormous differences in their backgrounds, the videos below may surprise you. As you will hear, the son of a high-ranking Nazi and the daughter of New York Jewish immigrants came to discover they also had things in common. Not only that, but also they fell in love and have been together for more than 26 years.

Rudi and Julie met in 1989 and have been sharing their histories and working on Stumbling Stone since then.

If I described someone as “the son of a high Nazi” official, you might imagine an unrepentant anti-Semite. While the first phrase describes Rudi Raab, the second couldn’t be further from the truth – as evidenced by the fact that Julie is Jewish. The story gets more interesting – but sadder – when you learn that Rudi’s uncle (his Nazi father’s brother) was killed by the Gestapo for his anti-Nazi sympathies. Aside from being an amazing story, Rudi and Julie’s lives remind us to question the assumptions that our imagination conjures up about different people and nations – in other words, to question our prejudices.
– Prof. Martin Hellman
Stanford University

I’m Jewish. I was born in 1944 in New York. My parents were immigrants who came to the US in the early 1900’s. They were very eager to be assimilated, but I was conscious of growing up in a very Jewish environment. 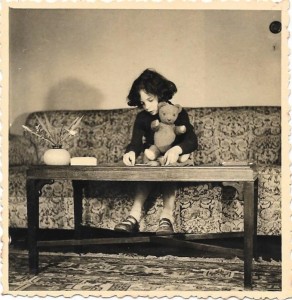 One peculiar part of my history is that in 1948, my father was transferred to the American-occupied zone in Germany as part of the Allied High Commission. His job was to oversee the resettlement of concentration camp survivors and other displaced persons. My mother, sister and I went with him.

In 1979, I moved to California and eventually became a freelance journalist. I was working on a story about the drug war in Berkeley when I happened upon Rudi, who was a police officer. 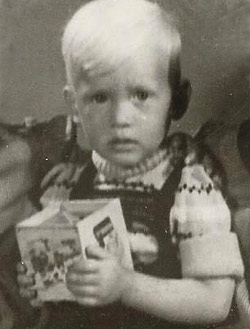 I was born eight days after the war ended in Germany. My father had been a high level Nazi official, in charge of founding the Adolf Hitler Schule. His job was to develop the next generation of leadership for the Third Reich.

My parents were introduced to each other by the Nazi party in order to produce the proper Aryan offspring. So it’s little wonder when you see me and listen to me – I look like a movie Nazi.

A peculiar part of my history is that my uncle Gerhard, my father’s brother, died at the hands of Nazi Secret Police.

In 1967, I left my father’s house and emigrated to America. That’s when the Nazi regime ended for me.

I earned a PhD in Medieval German Literature from the University of California, Berkeley. I retired a few years ago as a police officer of the City of Berkeley.