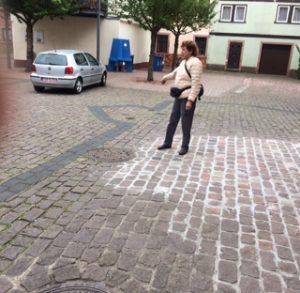 Julie stands in the symbolic shadow of a synagogue in Wertheim, Germany destroyed by the Nazis

When we left Leipzig to drive south, I told Rudi we were headed for Würzburg.

Arranging the details of a six-week, fifteen-stop book tour is even more daunting than it sounds and some of the results are somewhat random. Having decided to break up the six-hour ride from Leipzig to Esslingen, Rudi thought we should stay in Würzburg, the end of the Romantic Road. We’d taken a bike trip in that area years ago and that sounded like a good idea. No reasonably priced places were available however, so we booked in Wertheim. We’d forgotten that, but the GPS more or less got us there.

This is all just to show how random our location was and how astoundingly relevant to our trip it turned out to be.

Once we arrived in the village, we had to call to find the actual Apartmenthaus and it was surrounded by a number of pretty decrepit looking buildings. I wondered if Expedia had screwed up and found us a place we wouldn’t want. 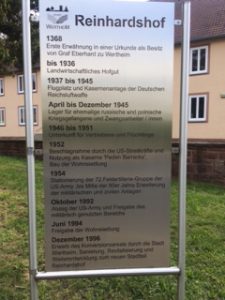 The decrepit looking buildings turned out to have hundreds of years of history. Although our building apparently hadn’t been part of the installation, in modern times the rest of the area had been a Luftwaffe airbase during WW II, a camp for Displaced Persons after the Nazi regime fell, a camp for former Polish and Russian POW and then barracks for the American army.
That probably all would have been enough, but wait, there’s more. In the Apartmenthaus, among the brochures for things to do in the area, we came upon a simple flyer with a Jewish star on the cover. It was a history of the Jewish population in Wertheim and of a memorial in the Altstadt, the old part of town.

Next morning, we went searching and found a large tour group crammed into what had been the courtyard of the synagogue, learning, in English, the history of the building. The synagogue was ransacked and destroyed in 1938. In the spot where it had been, a private residence was built. To commemorate the Jewish community and the synagogue, a private organization, Pro Wertheim, replaced light paving stones in the Plaza of old town with darker ones, making an outline on the ground of what would have been the shadow of the synagogue in the evening sun. The brochure also described a mikveh, a ritual Jewish bath, that still lies beneath the surface of the Plaza. 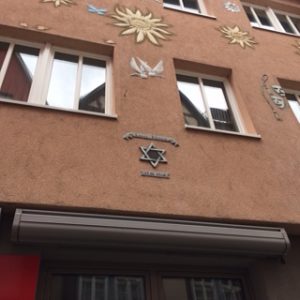 And finally, walking around the old town and gawking at the quaint, lovely buildings, we noticed a number of Jewish icons. A Torah painted on a wall, the name of a Jewish woman with her birth and death dates. There was also, according to a city map, a Jewish cemetery which we never found.
Despite all this, Wertheim is a medieval town. The multi-storied half-timbered houses, which get larger as the floors go up, create a tunnel effect where hay wagons could still pass through and people could still live. It isn’t a Jewish town. At its peak, it apparently had 201 Jews. By 1933, there were only 109. By November 9, 1939, Kristallnacht/the Pogrom, there were 45. On October 22, 1940, the remaining 19 Jews were deported and killed. Only four survived the Nazi death camps. The Nazis destroyed Wertheim’s Jewish life, culture and business.

But some Germans there have created an organization to preserve the memory of the former Jewish inhabitants at Wertheim. Their brochure, which says they welcome contributions says “In commemoration and warning against oblivion”.

Julie Freestone and Rudi Raab are touring Germany with their book Der Stolperstein. It is available as Stumbling Stone in English. Please excuse minor errors resulting from tight deadline and reporting from the field.