Spoiler alert: Today’s blog was supposed to be about new skills we’ve gained during the pandemic, but sometimes events overtake plans. And if you are a Trump supporter, you probably don’t want to read the rest of this blog. (You also probably aren’t on our email list)

How much of yesterday’s surreal events involving the United States Senate was strange and bizarre? We have to admit we did not watch it live. We watched clips on three different TV stations. But consider this. 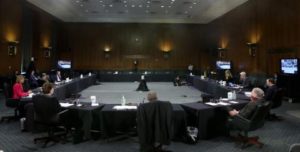 Usually dozens of reporters squat on the floor

First was the spectacle of an almost empty Senate hearing room, with virtually no media crouched on the floor filming the happening. The senators that were there looked appropriately spaced away from each other. Most of them had masks on. So that probably would have been weird enough

But most of the key witnesses and the Chair of the Senate health committee were participating remotely. They were all in isolation/self-quarantine or whatever euphemism is being used to explain that they were all exposed in some way to someone who tested positive for COVID-19 and they fear they might spread it. You know, the kind of thing that might happen if we open things up prematurely.

The cast of characters

Let us just recall a few things here. First, DJT announced last week that the witnesses that testified today would not be allowed to be heard in the Democratic-controlled House of Representatives (which has not reconvened on the advice of the House physician); they could only “come” before the Republican -controlled Senate.

Also let’s review only a small list of people that DJT has managed to remove because he didn’t like their “truth to power” positions. Or at least truth. The list is extensive and probably hits every department, the military, his own staff and includes some intimately involved in the pandemic response.

And just to get a sense of where veracity might be, take a look at who heads the Cabinet departments: industry leaders who sued the agencies they now head; lobbyists who tried to influence government regulatory policy.; relatives of DJT with no qualifications for their positions. U.S. Attorney General William Barr, who thinks he’s Trump personal lawyer. The list goes on. Oh yes, we forgot Jared Kushner, DJT’s son-in-law who was put in charge of finding peace n the Middle East and the stockpile of vital equipment for states and hospitals. You can finish the list yourself. And Dr. Deborah Birx, who has a long and apparently distinguished career, did nothing but sit immobilized when DJT suggested injecting disinfectants might help cure COVID-19. She didn’t even shake her head in disbelief.

One more thing to consider before looking at what was said yesterday. We think the point was examine the issue of whether it was safe to open the country back up. But remember that the Centers for Disease Control and Prevention had already prepared an extensive guidance with decision trees about this very topic. It wasn’t released because it didn’t support the “liberate” position advocated by DJT and protestors.

OK, back to the Senate hearing and the testimony the witnesses gave and the questions they were asked. And some of the comments that were made by committee members, some of them Republican.

After listening to this all, some things – not many – seem clear. Virtually no one really knows what’s going on. That makes sense, since this is a “novel” corona virus and even the experts are learning almost every day something new about how it behaves, who it infects, when it might be likely to end. So as much as DJT and others want to insist they know the answers, they can’t. 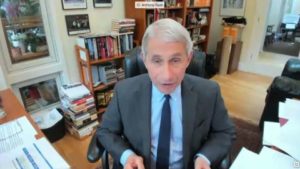 Dr. Anthony Fauci testifies remotely about whether it’s too soon to open up

Dr. Anthony Fauci, Director of the National Institute of Allergy and Infectious Diseases—at this point, DJT’s tweets notwithstanding—is probably the most credible and respectable voice on the topic of what we are dealing with. We would have liked to hear him say something from his reasoned perspective that gave us hope.

His testimony was not encouraging. But despite that, we take heart in not having someone spinning the information, trying to support the absurd statements that DJT has made. Fauci said that expecting a vaccine by the fall was “a bit of a bridge too far.” He said “there’s a real risk (if you open up too soon) that could trigger an outbreak you won’t be able to control.” And he said that he wasn’t just talking about potential deaths but also the negative impact on the economy.

Our own public health advisor

“I am pretty discouraged. I think it is clear that the shelter in place (SIP) has been effective in stopping the exponential growth of the epidemic and keeping the health care system from being crushed by patients. But it has not been effective enough to then decrease the number of infections. The US has been steady at about 2000 deaths per day for some weeks, although in the last few weeks there has been some decrease in the daily deaths, probably as a result of the clamp-down in NYC and the significant decrease in deaths there.

I have been trying to figure if there is any way out of this. I don’t see any solution. I don’t think the country is going to be willing to shelter in place long enough and hard enough to bring the number of new cases down to a level where they could be handled by case finding, isolation and quarantine, which was the original plan (hope). Even if we had the testing capability, which we don’t. It could be done – it is working in Korea, China, New Zealand, Vietnam and Taiwan – but I don’t think it will work here. (Editors’ note: China and Korea are seeing new outbreaks) Controlling the outbreak requires massive testing, community discipline and national leadership – none of which we have. The country including California is opening up more in May, and then the death rate will go back up. (Actually, a Washington Post story recently using cell phone data showed people started going out more around the middle of April.) ”

We just insert here that Republican Senator Mitt Romney also pointed out that DJT’s assertions that we’re doing a better job than any other country in testing is patently wrong. “Our testing record is nothing to celebrate,” he said.

Anyway, Dr. Brunner says, “I think there will be 100,000 deaths in the US well before the end of the month. New data coming from New York including antibody testing from 15,000 people across the state indicate the Infection Fatality Rate (IFR) for COVID is about 0.9 – 1.1%. I had previously estimated the IFR as about 0.5% with an ad-hoc methodology, but this NY testing gives the best data. If we figure 2/3 of the country will eventually get infected, ~200 Million people, I had estimated the total  number of dead as ~1 Million. But if the 1% CFR is correct, then we will have about ~2 Million dead before this is over. Assuming people get immunity or a vaccine is developed and the epidemic does eventually stop, instead of just going on forever.”

And, he says,” to make matters worse, my lathe turns out to be defective so I can’t make my little steam engines!  So I am working on fixing my lathe. Making some progress there, at least. “

Julie Freestone and Rudi Raab continue to blog about the pandemic and receive incredible input from their blog readers. Julie worked for Contra Costa Health Services, the County Health Department, for 15 years.