Where was God during the Holocaust?

When we came back from our book tour in Germany in May, we were pretty convinced we were done with that chapter of our life.  We had to abort the trip because of Julie’s detached retina, requiring immediate eye surgery. Still, we’d done 12 book events in Germany, written a blog for every day of our one-month journey, gotten lots of media coverage, translated most of the blogs into German and felt we were finished. And that was after two years of doing readings in the United States before our German adventure.

We talked about taking down our websites: Stumbling-stone.com for the American version of the book and Der-Stolperstein.de for the German translation. But something happened recently that may have changed our minds.

We get email from a Muslim 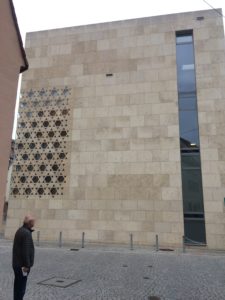 Rudi at the synagogue in Ulm, Germany were we did our reading

Through the “Contact Us” feature on our German website, we received a message from a young man who attended our book reading in Ulm, Germany.

We remembered him. He came with two friends, all in their early twenties. They listened intently and after the formal reading, they stayed around to chat with us and they all bought books, which we inscribed for them.

Instead of describing what he wrote in his email to us, we think we will let him speak for himself (The parenthetical comments are ours):

“Your book reading, the question-and-answer session as well as your commentaries moved me. I don’t really know how to begin. Please let me introduce myself: My name is Ergin Kahya. I live in Ulm, Germany. I met you there in the restored synagogue. I would like to thank you two for this undertaking. I have to admit that tears are running down my face as I write this.

I have just now finished reading your book and it has affected me greatly, especially the story of Gerhard. When I read diaries of others, among them that of Rutka Laskier,  (a Polish Jew murdered at Auschwitz concentration camp in 1943 at the age of fourteen). I could not grasp that something like the Holocaust could have happened.

But now having read Gerhard’s story—I myself am an observant Muslim—I ask myself “where was God during this time?” I cannot comprehend that a human being has to suffer such a gruesome fate. There is no fairness. I am aware that so many people suffered torture and death. But when you finally can put a name to a victim, the pain becomes even greater and I begin to doubt that there is a “higher spirit “. I am beginning to doubt God. A young man was mistreated so harshly because he did not remain silent. Because of his attitude, which I think was the just one, he was robbed of his right to life. I admire your uncle for his “Nun gerade nicht!”—I will not comply, epecially not now–, his attitude of resistance.

I would like you to know that here in Germany is a young man—me— who is fascinated by his story and his strength. What Gerhard thought, said and did inspires and motivates me! I will try to follow in his footsteps in order to give meaning to his meaningless death, in my everyday life and in my relationships with others.

Thank you very much for giving him a voice. I wish you well and thank you from my deepest heart. #Greetings #Shalom #Salam

We were amazed at his moving comments and we wrote back. We told Ergin that his comments made all the work we did on the book, including the German translation,  worth it  We also told him that in high school, Rudi had to read “Nathan the Wise”,  play by Gotthold Ephraim Lessing, a German writer of the Enlightenment. Nathan, a rich merchant, was on his death bed, surrounded by his three sons. He showed them his heavy golden ring and told them that the one who lived the most worthy life would inherit his ring and his riches —a metaphor for the three religions of Judaism, Christianity and Islam. This play was Rudi’s inspiration. We also recommended that Ergin read Elie Wiesel’s book “Night,” which grapples with the issue of where God was during the Holocaust.

Responding to our suggestion and giving us permission to use his name, Ergin said, “Through your work and through Gerhard and his qualities, my life has become richer. I will keep my promise and I thank you again from the bottom of my heart that you inspired me in such a wonderful way.” Not only did he say we could use his name and his home town, but he said “I would be happy if someone were to stop me in the street in order to talk about your book.”

How could we take down the website after this?

Rudi Raab and Julie Freestone wrote Stumbling Stone, a novel based on their true life stories, to give voice to Rudi’s Uncle Gerhard, a forgotten victim of the Nazis. Rudi translated the book into a German version, Der Stolperstein.