When we shared the blog about baseball with you a few days ago, we had misgivings. We know a few avid fans are out there (Laurie, we see you) but we thought most of you might roll your eyes and skip reading it. What a surprise. And we also got a lot of partisan tales. Julie said she began her love for the game as a Yankee fan. We heard from Red Sox backers, Detroit Tiger lovers and lots of others.

Let us first remind you that Rudi told the story about how he, an immigrant from Germany, learned about baseball from his first father-in-law. It was 1967 in Speckles, California. He not only learned the rules of the game, but even got some tips about how to pitch. That saga led to a great story from our friend Jay.

“It reminds of one Saturday afternoon when I was tossing a ball in the street with four-year old Amy (his daughter). This “old guy (!)” walked by, looked at me scornfully and said, “Teach her to THROW right!”  So I started to do just that. Several years later she had a lock playing third on her softball team: she was the only one who could make the throw to first—and get someone out! I was maybe 40 then, and my takeaway was “maybe old guys aren’t entirely full of it.”

Julie’s cousin Paul, who has lived in New England on and off for years, is nevertheless a staunch Yankee fan. He is mourning the lack of a baseball season. “Spring without baseball has been like… well, I can’t come up with a simile. Last summer I was in NYC and had the good fortune to get to watch a game at the “new” Stadium – my first-ever visit there. The Yankees won in dramatic fashion, a bottom-of-the-ninth comeback with a home run to tie and a grand slam to win. The magic never goes away.” 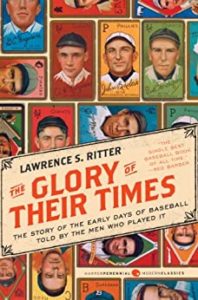 Sara says this is the best book about baseball

Our friend and neighbor Sara had a story about her father-in-law, who lived near Boston and was a Red Sox fan, who played in a local softball league. She gave him what she called the best book she ever read about baseball, The Glory of Their Times, about the early days of baseball told by the men who played it. That led to stories from him. “He told me that Red Sox players would conduct barnstorming tours to supplement their income, and one of those tours made a stop in Walpole, Massachusetts, where he lived.  He actually got to play at least one game against Red Sox players, including the great pitcher Smoky Joe Wood.  This was probably 1914 or 1915 and my father-in-law was about 17 or 18 years old.

Our friend Deborah wasn’t a baseball lover, but she says one of her only memories of her paternal grandfather was of him listening to baseball games on his (probably Bakelite) radio in the kitchen of their tenement house in Providence. “The sound of baseball on the radio is distinctive and evocative…able to roll back    time to when it was THE method by which Americans ingested baseball.

Julie’s comment is that there’s nothing like baseball on the radio. There was a time when a Giants game was on regular television and was also on KNBR radio. Rudi would watch it on television because he was totally focused on the pitchers. Julie would leave the room and listen to the game on the radio. Now they both watch on TV and Julie’s car radio is set to KNBR, except for this season.

Deborah’s father was a Red Sox fan who lived long enough to span their World Series triumphs in 1918 and 2013. “He had yellow lined pads full of statistics in his increasingly shaky handwriting. My mother showed no interest in baseball or any other sport (asportual like me) until the last decade of her life. My father was in a nursing home and my sister moved in with my mother. Thinking they would have something to watch together, my sister gave her a simplified tutorial to understand the game. My mother caught on, not so much to the game, perhaps, as to the players, and became an “avid” fan of her favorites.”

“She would announce the game times, making sure she was awake to watch. I believe she was just as happy watching reruns of games; the thrill of the men in tight pants was just as compelling. My sister had her demonstrate this knowledge to me, as one might with a precocious toddler …”Ma, tell Deb who Madonna is.”  “Oh, she’s A-Rod’s girlfriend.” Deborah says her father was indignant and incredulous that my mother was now watching baseball, with him in the nursing home, when she had never deigned to share his interest all the decades of their marriage.”

And now for the Detroit Tigers

Reporting in from Portland, Oregon, Sharon said her father had the radio tuned to the Detroit Tigers games whenever he worked in his shop or outside. “Or maybe he did the work BECAUSE the game was on and he wanted to listen that way.  We would attend live games three-four times a summer, almost all double-headers. Al Kaline!  We had an insulated bag and, I think, always brought the same food: German baloney sandwiches on hamburger buns with homemade vinegar cukes to pile on.  My dad died in 1998, and mom in late 1999.  When baseball started up the next spring, all of us siblings attended our first game together in at least 35 years.  That was the last year the Tigers played in old Tiger Stadium.

And speaking of food, our neighbor Larry says he is missing sports on TV, too. “I used to do the hotdog thing, but Texas style with bean-less chili, mustard and cheese. One of my favorite comfort foods. I recently used my last can of Texas Wolf Brand Chili (essential for making my hotdogs), but was able to order 6 cans online from Irving, Texas and they were delivered to my doorstep. All I need now is for Sports to resume.”

Donna said her step-dad listened to the games and “once, while still living in Chicago, they went to Wrigley Field and saw the Chicago Cubs and the Brooklyn Dodgers play. But mostly we just heard the games on the radio.  When I moved out into my own one room with bath at age 17 I would listen to the ball games on my small radio because it reminded me of home.”

And our blog editor had a story about the Dodgers. She’s been a Dodger fan for her whole life. But we Giants fans don’t want to hear stories about that team.

Julie Freestone and Rudi Raab are blogging daily about the pandemic. They have hot dogs and buns in their freezer probably to be eaten when they watch a sports movie.