An Unscheduled Stop, Munich May 2018

Almost two years ago, Rudi attended the 50th reunion of his high school class from Essen, Germany. He mentioned our novel Stumbling Stone and when he translated it into Der Stolperstein and we began planning a book tour, he sent his classmates an announcement and asked for suggestions about possible book events. No answers. 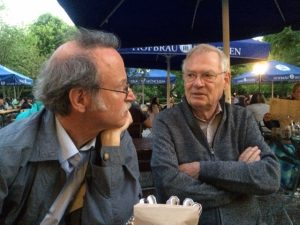 When we announced the dates of our German book tour, two classmates said they’d plan to attend an event, one in Munich and the other in Bremen. When Stephan appeared, Rudi was pleased and surprised. They hadn’t been good friends in school. The three of us went out for a beer after the reading and subsequently Stephan attended another event and invited us to his home for dinner. “It will be a simple meal,” he warned. German dinners are generally simple, since the big meal is normally eaten mid-day (we seem to be eating big meals round the clock).

At the beer garden, I think Stephan commented on the section of our talk when Rudi says that I asked him at the very beginning of our relationship what his father did during the war. No romantic small talk about whether he liked walking on the beach or gourmet cooking. I think Stephan asked, with a slightly mischievous smile, whether I was going to ask him what his father did during the war. I haven’t been asking that question as much on this trip as I have in the past. “If you want to tell me,” I said.

He didn’t say anything that night. 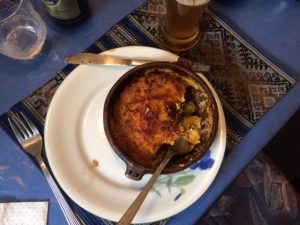 Some days later, we drove to his home in a suburb of Munich. Many Germans don’t own houses and Stephan and his wife, a Chilean-born physician, live in an apartment. Their two grown sons were raised there. The meal was anything but simple—Rudi expected rolls and cold cuts. We had a first course of caprese salad—tomato, basil, mozzarella cheese and vinegar. Then we were served a wonderful Chilean dish in individual clay pots. We’re supposed to get the recipe and I didn’t get the name of the dish, despite trying Spanish and German. It had maize (ground corn), meat, olives, onions and some ingredients. Dessert was a dish with quark (sort of a cross between sour cream and heavy cream), berries and shaved chocolate.

I turned to Stephan at some point and said, “You asked me if I was going to question you about what your father did during the war? I’d like to know if you want to tell me.”

The story was that the father worked for a long time in a steel related industry, considered an essential war job and therefore he was exempt from the military. Then in 1941, for unexplainable reason, his father changed jobs, still in the same field and was immediately drafted. Stephan thought someone in the company may have reported him for some reason.

At first his father was sent to the Russian front and then when the Germans needed English-speaking volunteers, he was assigned to a communications job, mostly in Italy, listening in the hope of intercepting enemy messages. Stephan said his father always used that situation as an example of why learning another language is important. Stephan speaks excellent English.

His father and the rest of his team would leave the hotel they lived in first thing in the morning and climb up the mountain to their listening post. Then they climbed down at night. When the war ended, there was no one around to capture them. Stephan’s father walked back to Germany and eventually surrendered to the Allies to get papers giving him permission to go on with his life.

Susan Griffin, in her book Chorus of Stones (just by coincidence I’m reading the book on our trip), says she has a theory that the need to reveal secrets may be a basic human need. She also says “What is buried in the past of one generation falls to the next to claim. The children of Nazis and survivors alike have inherited a struggle between silence and speech.”

And some people, like Stephan perhaps, in exhuming the past, are showing that not every German had blood on his hands.

Julie Freestone and Rudi Raab are on a book tour in Germany with their novel Der Stolperstein. This encounter took place some days ago. They will be doing four events this week.