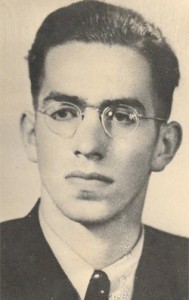 When we did our book events for Stumbling Stone, the American version of Der Stolperstein, we decided to talk very little about Part III of the book—Gerhard’s story. Instead we focused on the unlikely romance between Karl Schmidt and Sarah Stern. We didn’t want to give away the mystery, assuming that no one would buy the book if we told them about Gerhard, who resisted the Nazis.

When we were planning our book tour in Germany for Der Stolperstein, we thought audiences would want to hear about Gerhard, who resisted the Nazis. It’s turned out to be a both/and situation. Germans seem quite taken with the story of Sarah, the Jewish reporter, and Karl, the German-born son of a high-ranking Nazi. There is also a fair amount of interest—and some controversy and even anger— about Gerhard.  A newspaper in Steinbach, writing about our appearance there, called it a tragic story told with some humor. And talking about Gerhard in some detail hasn’t stopped people from buying the book. In fact, we’ve had to order more for the rest of the trip.

Our event in Munich, Germany, was at the NS-Documentation Center, a new building surrounded by stark white, square-columned, semi-classical buildings all designed by the Nazi architect Albert Speer. The Center describes its mission this way: “The City of Munich is aware of its special obligation to keep alive the memory of the Nazi era and its crimes and to inform citizens and visitors about it. After all, it was here in Munich that the rise of the National Socialist movement began after the First World War.”

The room where our event was held was set up for about 200 people.  About 30 people attended. The Center bookstore had bought books to sell and this was the first place where we encountered someone who had read the book before we talked.

He had plenty to say about Gerhard’s situation. In our talk, Rudi explains what happened to Gerhard: murdered by the Nazis after being in the Buchenwald concentration camp.  Rudi notes that even though Rudi’s father—Gerhard’s brother who is Der Alte in the novel—was a high-ranking Nazi, Gerhard was a victim of the Nazis.

The audience member was angry. He wanted to know why Der Alte hadn’t done something to save his brother.He said that since he was a high-ranking Nazi, he should have been in a position to get Gerhard out of the concentration camp to Switzerland and safety. Or to a normal jail where he would not have been tortured or killed. Since that didn’t happened, the question is why?

Several times in different places, someone wanted to know what Der Alte said about his brother. Rudi tells this story: Gerhard was born on December 24. So was Rudi’s sister. Every year when it was her birthday, the family would gather in front of the decorated Christmas tree and sing traditional German Christmas carols. Rudi’s father walled himself off behind an open newspaper, presumably reading it. During the commemoration of Christmas, he said nothing and did not participate in any family activities. Once the Christmas part was over, he would acknowledge Rudi’s sister’s birthday by opening a bottle of champagne and making a toast, all the while remaining silent about the fact that Gerhard’s birthday was the same day. And on no other day did he ever mention Gerhard.

And at Rudi’s father’s funeral, the eulogy, presented by one of his former Nazi students, made note of the fact that he never in all his life, talked about his brother.

Another person at the Munich event wanted to know why it had taken us so long to learn some facts about Gerhard’s fate. He was surprised there wasn’t a central registry of everyone who had been in a concentration camp.  The NS-Documentation Center is working to always find more information.

In our book, we deliberately leave open the question of what Der Alte’s role in Gerhard’s fate was. We don’t know. But people are anxious for a specific answer. At one event, one man pressed for answers about each detail of Gerhard’s decisions and destinations.  I finally said—probably in ungrammatical German— “it’s all in the book,” a not-so-gentle hint for him to buy it.  He didn’t.

But in the end, in Munich and elsewhere, the photo of Gerhard on the big screen is a dramatic way of reminding us about his life.

Rudi Raab and Julie Freestone are on a six-week book tour in Germany. They will be talking about their novel Der Stolperstein in 15 locations.