Should Stumbling Stone Be Translated into German?

New friends of ours- German musicians Friedrich Edelmann (he was born in Germany and, like Rudi, his father was a member of the Nazi Party) and Rebecca Rust (she was born in the U.S. and is Jewish)- suggested that we do a book tour/musical event with them in Germany. 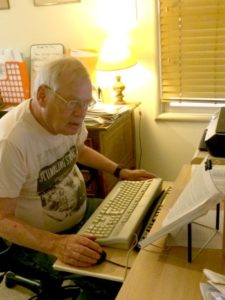 Rudi is beginning to translate Stumbling Stone into German.

Since our novel, Stumbling Stone, is presently only in English, we began thinking about whether we should translate it and publish it also in Germany. We decided to ask some friends, other authors and people with connections in Germany whether it was a feasible idea. We also asked whether Germans would be interested in the story; what obstacles we might face and whether there a compelling reason to do it.

A German couple, living in Germany, but with extensive knowledge and experience with English and Americans said, “We hope (you) do the translation work. It is very important and absolutely necessary that young people in Germany (especially today with all the right wingers back) get educated and get first hand information about the darkest times in our history. Touring with the musicians is a great idea – high schools, church halls, community centers etc”

Our friend Marty Hellman, ever the scientist and an author (with his wife – A New Map for Relationships), said, “I think there would be a bigger market in Germany than in the US for your book. They are likely to resonate with what I love about your book: the way it presents a more nuanced picture of people, especially Germans living under Hitler. It helps answer the question of ‘German guilt.’ You have Rudi’s father, but then you have Uncle Gerhard, his brother.” He also pointed out that the market overall is about a quarter the size of the U.S. and asked whether enough Germans read English so that it might not be worth translating.

Our website designer Nick, with a daughter living in Germany, said, “I think your book would be very interesting to native Germans, particularly those of our generation, whose parents’ lives were so deeply affected by the events of WWII— and whose own lives, therefore, were also fundamentally influenced. The book’s name itself will be familiar to Germans living in Berlin and other cities where stumbling stones have been installed so you have an instant marketing campaign, at your feet, so to speak.”

His wife Nel, who grew up in the Netherlands and whose father was picked up in a street raid during WWII and forced to work in Leipzig for a few years, agreed. She called our attention to a website about the Kindertransport as an example of how interested Berliners are in the topic of WW II. “I am wondering if you should start by seeing if there is interest in the giftshops of some of these places for the English version of your book. It could not hurt. I think English-speaking tourists might be delighted to find it there.”

Our friend, therapist Armand Volkas, who leads Acts of Reconciliation workshops for children of Holocaust survivors and children of Nazis said, “I have not worked in Germany for a few years, but I hear from my German colleagues that there is a surge of interest in the legacy of the Holocaust and the Third Reich among third-generation Germans. They are interested in uncovering family secrets. Your book would have some resonance with what’s happening in German culture. I would love to see your book translated into German……..and it would be a lot of work.”

Author (The Unlikely Governor) Robert Heller, born in Germany, said, “There are lots of books about the Nazi era coming out right now — and yours has the unusual “reverse” twist. Pretty unique in that regard. But write it fast.” Bob felt strongly that instead of translating the novel, we should write the German version as a “true” story, including family photos. (Many are already here on our website.)

And finally, our German-born friend Sylvia said, “I’m sure you both have read the recent article in The New Yorker about Germans working through their feelings/ traumas of growing up in the aftermath of WW II. So there is a market.”  She points out that the New Yorker article speaks to the process for Germans, and not about the reconciliation aspect. “Your target group would be them, very different from what you attracted here I’d guess”. Like Bob Heller, Sylvia felt the German version should focus on Rudi’s family.
We are wondering what you think?  We welcome your comments.