They filed into the Jewish Museum in Steinbach quietly, respectfully and looking, some of them at least, curious. Although it wasn’t a synagogue, I noticed the men donning kippot -Jewish skullcaps – supplied by the event coordinator. Stephan Weissbrodt. 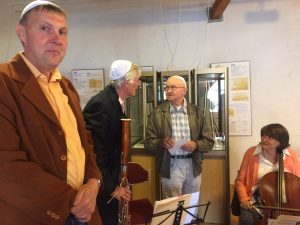 We hadn’t been in Germany for more than 24 hours to launch our book tour before we came literally face-to-face with the question of whether Germans care about anti-Semitism. That morning we had read a news accounts of “Kippa Tag” a protest launched to object to a prestigious award given to a German rap group whose song included anti-Semitic slurs. Non-Jews in Berlin, where the award was given, were wearing kippot to demonstrate their objections. By the time of our event in Steinbach, a village of 900, other cities had embraced the effort.

This was the first stop in our book tour, with 14 more to come. We are doing most of the appearances with Friedrich Edelmann, bassoonist, and his wife, Rebecca Rust, cellist. The tour was their idea. So was translating our Stumbling Stone novel into German. We were apprehensive about whether anyone in Germany wanted to hear our story. And some feedback we got from German family made us think a story about a Jewish woman falling in love with a German man whose father was a high-ranking Nazi and whose Uncle was a victim of the Nazis wasn’t as fascinating to Germans as it seemed to be to American audiences.

There were introductory remarks by the Museum President, the town’s former mayor and a description of Steinbach’s history. The Museum was created to explain the history of the area as a coal mining industry, to focus on the role of Jewish diamond cutters and to remember the Jews who once lived there. Dieter Zenglein, whose title in German – Kreisheimatpfleger, Landkreis Kusel,- identifies him as the historian and protector of local history, lore and culture, talked not only about the town’s past, but also about the Kippa protest.

I don’t’ speak much German, but I understood he was talking about the rap group and the award and in general, about anti-Semitism. I heard him repeatedly say “Schande” a word I recognized from Yiddish as shame or disgrace. I was told later that he praised the bravery of the Righteous Germans in Berlin and elsewhere for stepping up and speaking out. Even with my limited understanding – I was touched.

Here we were in this town where every Jew had either been murdered by the Nazis or fled. The capacity audience of 40 people listened with rapt attention, asked penetrating questions, made relevant and heartfelt comments, bought every book we had brought with us and more. And not one person there was Jewish (except Rebecca and me)

Steinbach will be a hard act to follow and no matter what happens on the rest of our trip, we will never forget the sincerity and compassion of the audience in that small village in Southern Germany. Maybe lessons have been learned from the past after all.

Julie Freestone and Rudi Raab are touring Germany for six weeks with their novel  Der Stolperstein (available in English as Stumbling Stone)  Please forgive minor errors resulting from writing on the road, in cars and less-than-ideal hotel rooms.