For years, our front “lawn” has been a bone of contention between the two of us. We live in California and water is usually an issue. Some years have been worse than others and a few years involved water rationing, fines for overuse and neighbors ratting on each other.

What our “gardener” did

Julie had been campaigning for a drought free lawn. Rudi didn’t want to replace our aging “gardener” who counted on us for a measly income. We only needed him about six times a year, but he lived a very, very marginal life, often renting part of a garage or sharing a bed in a room in a house with other people. If he lived only on what we paid him, he wouldn’t survive, but we did provide something.

A word about why we put the word gardener in quotes. When he began cutting our grass or weeds or whatever they are, Richard was the boyfriend of the woman who cleaned our house. We had just moved in and after a few tries with the person who maintained our neighbors’ yard (he didn’t like grass and had persuaded them over the years to replace it with gravel), we suggested to Gladys that maybe Richard would like to mow the lawn instead of sitting in his car and waiting for her. We had the lawn mower. He brought his machete. Their relationship ended not longer after but he continued to cut our grass for several more decades. 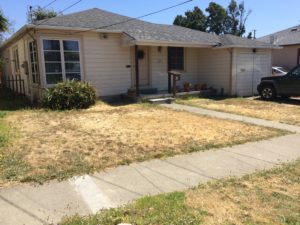 The lawn was dead for half of the year

So back and forth we went about the lawn and as the years went by, the argument also centered on watering the lawn in the winter. Julie was for letting it die (which took no effort). Rudi watered it for the first few years. Eventually we gave up; the lawn was dead for six months each year. Finally a few sad facts came together. Richard, who had never been much good at telling weeds from viable greenery, was having trouble with his vision. He sometimes hacked away at things we wanted to save. And sometimes he missed the grass and hit parts of the house.

Another problem had to do with the weed wacker and the lawn mower. We had replaced them a number of times. We had repaired them a number of times. Rudi had explained to Richard some of the intricacies of each (they weren’t very complicated or fancy). He showed him the instructions in Spanish. Julie’s theory was that he might not be able to read. Either he wasn’t literate or couldn’t see. Whatever the reason, the equipment continued to malfunction.

We try to mow the lawn

It all came to a head last year when Julie’s cousin Alice came from Seattle. She hadn’t been to visit for a decade and would be parking her RV in our driveway. Next to our dead lawn. With knee high weeds. An intervention was needed. Rudi didn’t think the situation merited Richard. The lawn was pretty dead. We tried to start the mower. No luck with it or the weed wacker. Also dead. We remembered years before we had borrowed our neighbors’ electric mower. Negotiations ensued. Phone calls to Mexico (one of the neighbors was vacationing there) to be told how to start the mower. Julie mowed the lawn. Alice came. We needed a better solution.

Finally Rudi agreed that between the need to again replace both lawn mower and weed wacker and probably Richard, the continuing dire predictions about drought and the incentives being offered for installing low water use plants, the time was now.

We don’t do yard work

What to do? We both hate gardening. If the front lawn was a disgrace most of the time, the back yard was a jungle. Things grew there mostly without our help . Richard did cut the lawn and sometimes things we didn’t want cut and wouldn’t cut weeds that looked like flowers. But we have an enormous fig tree that produces two crops a year (we’ve grown to mostly like figs); there’s a lemon tree that has no seasons and dozens of lemons year round. Other things grow there that we planted or that our friend Jane helped us plant when Michael and Janette got married almost 20 years ago and we had two wedding-related events in the “garden.”

By then, we had joined Ashby Village, the organization that Julie is involved with that supports older people to stay in their homes and thrive. A knowledgeable volunteer came and gave us suggestions about how to kill the lawn and install drought resistant vegetation. It sounded intimidating. Another Ashby Village member lent us books with wonderful pictures and instructions we couldn’t imagine following. What now?

By then our niece Paula had married Mitchell. He has three siblings and they all live in California; one lives nearby in Berkeley and her husband Bernardo is a landscape designer with impressive credentials and stunning gardens to his credit. He came. He respectfully inspected our pathetic lawn and got us excited about what he could do. He drew up plans and showed us plants.

That was sometime in the fall. We decided that our 25-year old roof should be replaced before we started the lawn transformation. Then we lost our place in line with Bernardo. We were pleased when he called to tell us they would begin on March 17. The porta-potty for the workmen would be delivered the day before. It came. The shelter-in-place was announced. The porta-potty left. Two months went by.

We get the green light 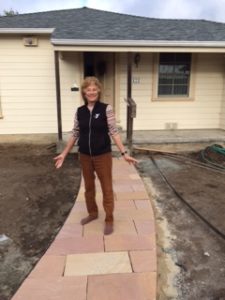 The lawn transformation is underway

Then some of the restrictions were lifted, including the ones for outdoor gardening. We got the news that we were next. A new porta-potty arrived. We asked if the crew would wear masks. Bernardo assured us they had a full COVID-19 safety protocol. They all arrived masked and pretty much stayed that way every day.

We also got a call from our screen repair person who had cancelled a fix-it date during the lockdown. He came while the three landscape workers were demolishing and installing. Julie said that having them working on the front lawn while the repair guy, also masked, was working in the back on the door made her feel like she was having a mani/pedi. Yes, it’s been so long she doesn’t really remember what that was like.

We’ll show you the final result of the lawn transformation in a few weeks.

Rudi Raab and Julie Freestone wrote Stumbling Stone, a novel based on their true life stories. One scene in the book describes a character and his brief experience working on a farm.