Whenever we told people we were going on a book tour with our novel Der Stolperstein, it sounded incredibly exotic. And in some ways it is. It’s almost surreal to think that here we are—two seniors in their seventies—standing up in front of strangers, sometime in places even Rudi has never heard of, and telling our story. And the story of Rudi’s Uncle Gerhard, who resisted the Nazis. 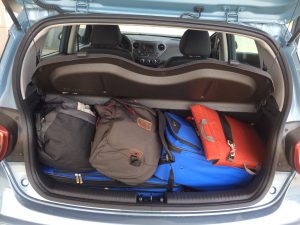 Car number one, minus books

But all along, whenever I was asked if I was getting excited about the trip, I think I would frown and sound like a wet blanket. “Too many moving parts” I’d say, or something like that.

When we told people we had 16 stops on this tour, we were asked if we had an agent or if our publisher was arranging everything. Nope. We self-published the book. Friedrich Edelmann and Rebecca Rust, the musicians who are doing most of the tour with us, handled some of the details. We did the rest.

Fortunately, the upside of the trip has proven to be so unexpected and overwhelming that the petty details almost fade into the background. Well, almost, but not completely.

So, in the interest of creating a catharsis and reducing my ever-present anxiety, we share some of the moving parts.

How Many Books to Order

Hey, it’s a book tour and presumably, someone might want to buy books. We had a chart and a map, plotting where we’d have books delivered (some to Friedrich and Rebecca, some to our German editor Isolde Haug Schoenhaar, some to Rudi’s nephew, a few to a bookstore in Hamburg where we are reading). The point was to have books to sell but not so many that we’d be left with a surplus. What would we do with them?

Less than a week into the trip, we realized we were going to be short. We had no idea that we’d sell so many books at each stop. We had to order more—in the middle-of-the night on May 3. These books are print-on-demand so they are not sitting and waiting to be shipped. They must be printed first. And we had to start rationing them. We have 12 books left for two stops until Matthias, Rudi’s nephew, gives us his supply next Thursday. It feels like a military operation.
Right, it’s a good problem to have but instead of counting sheep at night, I’m counting books.

When we first imagined this trip, Rudi thought going by train was the best strategy. Thinking of suitcases, backpacks, boxes of books and trying to coordinate train schedules with our plans, we agreed that renting a car would be the best approach. So many moving parts, including horror stories we heard from our friends about being overcharged for insurance, which the rental company insisted had to be purchased. All the stories proved to be more or less true.

We arrived in Frankfurt after 12 hours of no-sleep flying to find a group of angry Hertz customers. There were no cars, even for those of us who reserved ahead of time. An hour later, when we were told our car was ready, and with two hours of Autobahn driving ahead and an event the next day, we were in no position to question what kind of car it was. If it was a car. It looked more like a toy. Somehow, we wedged in our luggage. And later boxes of books. We were also in no position to insist that we’d checked on the insurance situation. We paid. And I began writing angry letters to Hertz in my head.

But when we turned that car back in and several days later, picked up another one, a new set of issues arose. The trunk was bigger. Good. But Rudi couldn’t figure out how to drive it. Too many bells and whistles. He needed a lesson before we took off. Maybe the train would have been better? 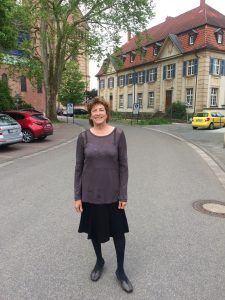 One of Julie’s mix and match outfits

When we lived in Germany after the war, my mother wrote letters almost every day to her sister. Those letters became the basis of some of the dialogue in Stumbling Stone. In many of them, my mother asked my Aunt to purchase and ship clothes for me, aged four, and for my sister,15. We were in Germany after the war. Everything was in short supply. There was nothing to be bought legally. My father was a civilian employee and didn’t make a lot of money. I don’t know if the military stores, the PX, were available to him. Just by way of saying that I wish I had my Aunt Clara to ship some stuff to me.

We’re only three weeks into our trip and I’m pretty sick of my clothes. We need outfits to wear at our readings and every-day things. My clothes “consultants” Sue and Janet, had urged me to take more things to wear on off days. They were right. I didn’t. Doing laundry isn’t an option in most places because we don’t have time. I remember when we drove across the country eight years ago for seven weeks, I was really tired of looking at everything in our suitcases but at least the stuff was clean periodically. Another detail to worry about.

As one event after another began to firm up on our schedule, Rudi started muttering and then chanting and then wailing, “That’s enough.” We stopped at 16 and one was cancelled but 15 events in six weeks is too much for us. It isn’t just the reading. It’s the stimulating conversation afterwards and often dinner and drinks.

Again, it’s a nice problem to have but when we finally get back to our hotel room, we’re (I am) often too wound up to go to sleep. Good time to start worrying about the number of books we need. I get why people who make a living doing concerts take drugs to sleep, drugs to wake up, drugs to perform. Which we aren’t going to do. But no more late-night dinners.

To get ready for this weird odyssey of ours, Rudi translated the English script we use for our readings and I practiced every day for months. Ingrid Mueller, our friend who was one of our editors and taught German for her career, worked with me to get the pacing and cadences right. She also helped rewrite some of the script to banish some German words I just couldn’t pronounce. Rudi listened, not always patiently, to my daily recitations and corrected—sometime the same word over and over—my mistakes. And at the same time, I was doing a German program online with Duolingo. Rudi explains at the beginning of our reading that I just began my lessons last September. Apparently, all the practice paid off because a number of people at each event congratulate me on my remarkable progress. And then they talk to me. In German. I have no idea what they are saying.

Some followers of this blog have suggested we have another book in the making, based on our description of this book tour. Once, when we were visiting Rudi’s mother in Heidelberg, Germany, his father called her house to talk to him. Rudi’s parents had been divorced for 25 years at that point. It wasn’t a friendly divorce. His mother told me the old man had commented to her at the start of the call that they would have been married for 50 years. I asked if she ever wanted to have him in her life again. “I’d rather fly to America in the cargo section of an airplane,” said Gerda, a woman who had never been in a plane and never would be. That’s about the way I feel right now about another book. Because writing a book leads to publishing a book, which leads to book events. And here we are.

Rudi Raab and Julie Freestone are on a book tour in Germany with their novel Der Stolperstein. The room they are staying in faces Hitler’s vacation spot, the Eagles’ Next. They are taking a break for a few days. This coming week they will be in Ulm, Landau/Pflaz, Dortmund and Bad Lippsinge.