When Julie was in high school, she fell in love and over the years, despite three husbands and other long term partners, she’s never forsaken that first romantic target: baseball. Those were the days of the New York Yankees: Mickey Mantle, Roger Maris and Whitey Ford. She listened on her father’s little radio, sitting at a table in the kitchen, learning the game from Mel Allen, the voice of the Yankees.

She read the New York Times sports section first thing every morning and knew the batting averages of every Yankee player. She switched allegiances (like husbands) a few times, rooting for the Cincinnati Reds when son Michael was their fan and then for the Oakland A’s and San Francisco Giants when she moved to California. The saddest time of the year was from November to February when there was no baseball of any kind. Then in February pitchers and catchers reported to spring training and the season began.

When Rudi arrived in California in 1967, he did not actually arrive in California. He arrived in Spreckels, California. Spreckels is where Claus Spreckels, a German immigrant decided to build a huge sugar mill that could process the sugar beets that grew in the Salinas Valley. That was sometime in the 1800’s. Claus Spreckels bought the little farmhouses in the valley and had them trucked to a grid laid out next to the factory. He added a store, a library and a firehouse. Voila: Spreckels, California.  During the Depression, they needed a quality pitcher for the sugar mill’s baseball team. It was a Triple A team and Rudi’s first father-in-law, John Collins, was that pitcher. He had two daughters but no son to teach how to throw a real pitch. (Yes, sadly, that’s the way things were in 1967 in Spreckels, CA). So after Rudi’s arrival as the husband of one of his daughters, John had someone to teach. It didn’t matter, apparently, that Rudi knew nothing about the game.

Rudi learned what a strike zone was, how to deliver the pitch and then how to throw curve balls, sinkers, fastballs and how to confuse the hitter with change-ups. And then the two of them watched every baseball game on TV. Wow, what an experience!

Julie’s career in journalism began when she became a sports writer for a weekly newspaper so she could get press passes to spring training. She interviewed superstar Jose Canseco when he was a rookie. Our baseball life together has included a trip to spring training in Arizona, outings to see minor league teams like the Reno Aces and the Sacramento River Cats, the hysteria of the parade in San Francisco to celebrate the Giants’ winning the World Series and many games at the Giants spectacular field with a view of San Francisco Bay. There have been good times and bad. Last year was a spectacularly bad one for the San Francisco Giants. 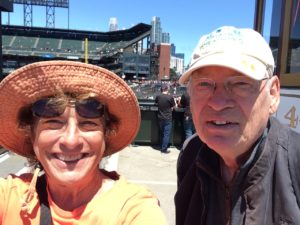 Players came and went so fast we didn’t even learn their names.

In recent years, as the Giants kept raising their ticket prices and schlepping to games seemed less exciting, we began a new tradition. Every time the Giants were on regular TV (we don’t get sports channels)—which happened about once a month during the season—we’d defrost some hot dog buns, cook up some hot dogs, dice some onions, get out the catsup, relish and mustard, add some beans and peanuts and settle in for three hours or so of watching the game. Sometimes, when we drove to and from our cabin, we’d listen on the radio. Julie never really got over her enjoyment of listening to baseball on the radio.

We can’t say we were exactly looking forward to this season with the same delight as in the past. Pitching ace Madison Baumgartner was gone; Superstar Buster Poster was getting a little long in the tooth and there was a new manager no one had bonded with. Things were changing but it was baseball and when Julie turned on the radio in March and heard a broadcast of a spring training game, she was ready.

And then came the pandemic, quarantine for some players, cancellation of the season opening games, discussion of having no games whatever. Then on March 15, the Bay Area News Group (Contra Costa Times) published its sports staff picks for alternatives when there are no sports on TV.

We saved the suggestions and when we were ready, we defrosted our hot dogs and watched Bull Durham. It starred Kevin Costner, Susan Sarandon and Tim Robbins. Maybe our standards are low but we loved it. And next up will be Miracles, about football (yes, we do watch that sometimes too. Or did.)

If we get really desperate, KNBR, the radio station that used to broadcast Giants games is replaying old games. We are not there yet but we might be.

So then on or about May 1, Rudi wondered  why, when we have no sports, why do we have a sports section in both the West County Times and the San Francisco Chronicle? Both papers have essentially been reporting for two months “there’s nothing to report.” Maybe it is that the papers want to retain the columnists and the reporters. Soon they are going to run out of highlights of old games to report. They may have already reached that point. The number of pages in the green section (sports) of the Chronicle seems to shrink by the day. And we don’t think we’re going to hear,”play ball,” anytime soon. For the sake of the players and the people who work at the ballparks, we hope we’re wrong.

PS: There may be no baseball scores, but here’s a new score related to COVID-19: The San Francisco Chronicle reports that a single number that defines the state of the coronavirus outbreak is gaining new status: the R0. That’s the reproduction value, pronounced R-naught. It’s an epidemiological number that, in simplest terms, represents how many people an infected individual will transmit the virus to. An R0 of 2 means that every infected person will infect two others, and those two people will each infect two more, and so on. An R0 of 1 means every person will infect one other, and a disease outbreak will neither grow nor decline. To slow down spread, the R0 needs to drop below 1. California as a whole is hovering just below 1.

Julie Freestone and Rudi Raab drove more than 10,000 miles to Nova Scotia and back in 2011. They had read Small –Town Heroes: Images of Minor League Baseball by Hank Davis (an old boyfriend of Julie’s). Sadly, they were never able to find a farm team game to watch on their trip.