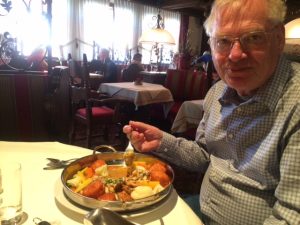 A Swabian dish with pork, mushrooms and of course potatoes

“Gallia omnis divisa est in partes tres.” (Gaul is divided into three parts) Thus begins Julius Caesar’s narrative of the war against the Gauls, the Pikts, the Germanic people and everybody else who stood in the Romans’ way.

For Julie and me, driving through the formerly occupied area of the Romans (100-330 AD), we encountered the southern Pallatians, the Swabians and the Bavarians—and of course their food.

While I sweet-talked Julie into publishing Stumbling Stone and later finagled the German edition, Der Stolperstein, the deep secret in my heart was a tax-deductible gourmet tour through the areas subjugated by Julius Cesar.

The first time Julie and I went to Germany after the fall of the Berlin Wall in 1990, every restaurant that offered German kitchen—and I specifically avoid the word cuisine—had an offering of wild trout, river sturgeon, elk, wild boar and venison. Stuff you could only dream of in America.

While grazing the kitchen of the three separate peoples we have visited so far, I noticed venison and wild boar are definitely gone and many fish are totally absent from the menu.

Our first stop was Steinbach, in Swabia. Our meal complements of our host, was at an Italian restaurant. Pizza, ravioli or spaghetti. I was hoping for wild boar with spätzle (noodles) or potato dumplings.

Next stop: Leipzig. We had a horrible meal at a chain restaurant. Can’t even remember what it was. 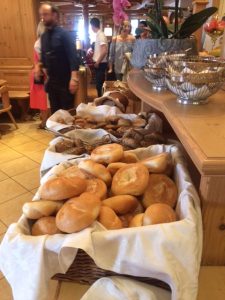 Breakfast rolls, crsip on the outside, yeasty, warm and soft on the inside, yearnig for cold cuts

A year before we left on our trip and having no idea I’d be going to Germany for six weeks, I lost 20 pounds. My doctor was worried about me being pre-diabetic. I cut out carbs and sugar. And now I’m making up for it.

I’ve pretty much stayed away from pastries. Not sure how long that will last.

Getting back to the three parts of Gaul. The Swabians are known as totally efficient, hard-working people, nose to the grindstone. They use every part of the animal in their cooking. So far, I have not ordered ox mouth salad.

I haven’t ordered in Southern Bavaria a sweet combination of animal guts (liver, kidney etc.) sautéed. Their sausage is well-known and made of veal. Normally I don’t eat veal because I want the cows to have a life before they are killed but all rules have exceptions. 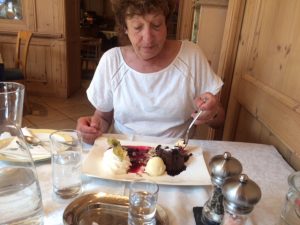 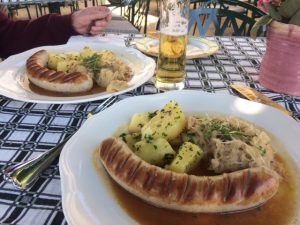 That brings me to the third cuisine: Austrian. Still no venison but incredible desserts, schnitzel of course. (Julie’s favorite food) and steaks (now fashionably not cooked well done)

I have no scales with me. I don’t know what poundage I’m at but the guilt is setting in. I’m looking at the buttons of my shirt. Are they pulling?

Rudi Raab and Julie Freestone are eating their way through their six-week book tour for their novel Der Stolperstein. They welcome any suggestions about what to do when they return to return to their normal life.