We were taking a break in our frantic book tour schedule to spend a few days with my nephew and his family in Duesseldorf, Germany. He had plans for us, including a bike and ferry outing and for starters, a music festival that was an annual event for his clan.

Julie wasn’t feeling well or wanted a little time for herself so I set off on the street car with Matthias, his wife, their two young children and Matthias’ father—my ex-brother-in-law —and his wife. 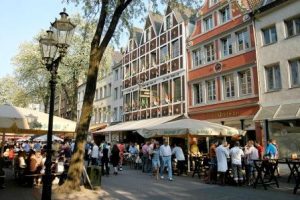 The Jazz festival is held in the old part of Duesseldorf

The festival was a New Orleans jazz and Dixieland affair. Not my favorite. Turned out to be wonderful music and terrific people watching.

We have all seen them: Germans at Pier 39 in San Francisco. There they go. An intact family. Everyone is wearing leather shoes and dark nylon socks. The slacks have creases and the belts are muted and leather. Even the kids wear nice polo shirts which are neatly tucked into their pants. The hair is neatly cut and combed. Without hearing them talk, you know that they are Germans. They are in San Francisco to have serious fun. The serious has its original meaning, not the modern one.

Just as a side story: when my nephew and his now-wife came to California to be married, their luggage was lost for more than a week. Matthias gamely borrowed my clothes— jeans, sweat shirts and other very casual attire. He was delighted beyond words to get his very tailored shirts and slacks back.

So here I was in Duesseldorf, sitting on a stony ledge. I was surrounded by about 10,000 Germans listening to incredibly well played New Orleans Jazz. I estimated that the crowd was mostly between 40 and 80 years old, everyone tapping their feet to the rhythm. About 30% smoked and nobody complained about it. I sniffed very carefully but could detect no trace of The Weed.

I looked around in this old downtown of renaissance buildings and cobble stones. I saw one lonely cop without a partner. He was there perhaps to keep order among the 10,000 revelers. I also noticed that waiters with trays containing maybe 40 glasses (gold rimmed) of dark beer were cruising through the tightly packed crowd. They were selling the beer for cash, which they kept in a leather aprons strapped to their waists. Then they handed their customers two, four or six beers and cruised on. I checked the cobble stones and saw no broken glass. I discovered the tables where the Germans placed their empty glasses, which were picked up, washed and refilled by other serious personnel.

The Germans had fun. It was organized. Peaceful, free of crime but fun in a very German way. On the surface, the format could have been in the US. The pieces were announced as to composer and the history. (In German) Then the music started. Then came the solos. Unlike the U.S., that was followed by very disciplined and short applause, not the enthusiastic appreciation of a particularly well done improvisation

Rudi Raab and Julie Freestone were visiting family in Duesseldorf in between book tour events with their novel Der Stolperstein. They are now back in the U.S. and continue to share reflections about their trip.