For a little while, we almost felt like tourists as we drove from Esslingen to Freiburg in Southern Germany through the Black Forest, an area of the country Rudi had never been through. The scenery was dramatic, a bit like the Sierras in California, except for the barns and houses that made us feel like we were in a “sound of Music” set. We were scheduled to meet Klaus and Kathy, another German–Jewish couple who are friends of friends and live in Freiburg. 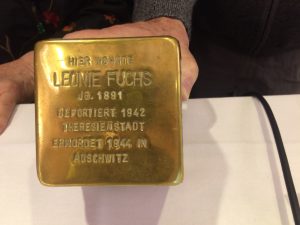 Stumbling stones are in many places, commemorating victims of the Nazis. This one was brought to our event

It didn’t take long for us to get back into our book tour mode. Unpacking the car in Freiburg and walking just a few yards to the Hotel Minerva, we spotted two Stolperstein – stumbling stones – in the pavement. We’ve seen a number of them even in the few days we’ve been here. Since our trip is about our novel, Der Stolperstein, it feels as if the stones are greeting us at each stop.

Each stumbling stone makes me choke up. The engraving on the bronze usually gives the name of the victim, their birth date and in just a very few words, a description of their fate: deported, imprisoned in Auschwitz or another concentration camp and then the date they were murdered. Just reading those brief words, there in front of the home the couple were taken from, evokes an image of life in those dark days. The two family members commemorated on the stones we saw near our hotel, happily, survived the Nazis. 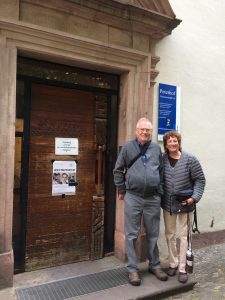 Posters with Gerhard ‘s photo were all around the building

Our event in Freiburg was sponsored by the Carl Schurz Haus and we made our way to the venue at the Peterhofkeller, discovering posters for our reading were up all around the structure, pointing the way to the entrance. With the very large photo of Rudi’s Uncle Gerhard, the only one we have of him as an adult, it almost felt as if he were there with us.

The turnout was disappointing. Fifteen people after the almost two hundred in Speyer was initially disheartening, although I was somewhat relieved as well. We are running out of books and the fewer people, the more we can hope to have some copies left for each venue. We don’t want to show up at a book reading without a single book!

Once again, the size of the audience proved to be less important than what they said and who they were. Freiburg is a university town and there were several young people at the event, including a girl who asked us to inscribe the book she bought to “the family Bernstein.” A whole part of my family shares that name. I wished I had had time – and the language skills – to learn more about her. 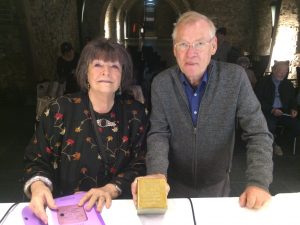 The most amazing person at the event was Marlis Meckel, the coordinator of the project “Stolpersteine in Freiburg,” a “gift” she gave herself for her 60th birthday, 16 years ago. Marlis said when she was a youngster, she never heard anything about the Holocaust. Then she began reading and learning. She and her husband visited Auschwitz and became friendly with someone who worked there. Commemorating local victims has become her life’s passion, overseeing the laying of more than 350 stones in Freiburg.

Near the end of the program, while Friedrich Edelmann and Rebecca Rust, our musician colleagues, played, the photo of Gerhard was on the screen. I gazed at it, wondering what he might think of the evening. 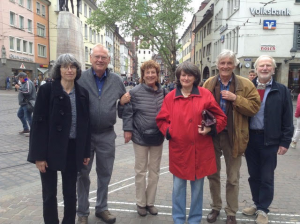 After the event was over, Rudi and I, Friedrich and Rebecca and Kathy and Klaus, went to dinner and Rebecca remarked on how historic it might be that we were three American Jewish women with three German Lutheran men.

As a nightcap, we were taken to the Alte Synagogue, an amazing pool created on the site and footprint of the Jewish synagogue destroyed by the Nazis. The pool is controversial (children play in it) and not all of our group liked it. I thought it was striking at night and very moving..

We continue to note how much different Germany is now than when we first visited in 1990. In those days, most Germans seemed reluctant to discuss the Holocaust, the Nazis, the loss of the Jews in their country. Today, every town and city we’ve visited seems to be “embracing the scars of history,” as our author/editor friend and colleague Elizabeth Rosner says.

Julie Freestone and Rudi Raab are on a book tour with their novel Der Stolperstein. It is a literary memorial to Rudi’s Uncle Gerhard Raab.