If we were writing a book about a book tour, we wouldn’t dare invent some of the amazing experiences we are having on our real Der Stolperstein tour. Here are a series of “snap shots” from Esslingen, a city in the Swabian area of Southern Germany where the dialect is so different it almost seems like another language. 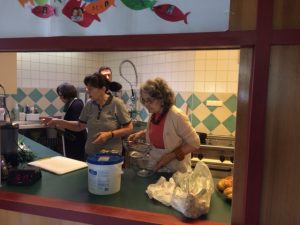 Iso and Ingeborg in the church kitche

Our friends Sherry Green and Gael Chandler— who introduced us to Isolde Haug Schoenhaar, our wonderful German editor—are doing part of the book tour with us. Esslingen is where Iso and her family live and our event was at Iso’s church. Gael and Sherry were there, wearing the “rock band” T-shirts for our book tour.

Iso told us the tradition at the church is to feed the people who attend events and she and her dedicated group of volunteers decided to make food that was consistent with the Jewish theme. So latkes, challah and sufganiyot—jelly doughnuts—were the order of the day, along with lemon cake (yummy) and possibly some other goodies I was too busy to eat.

Much wine and champagne were poured – we don’t drink before an event, but no one seemed to be in a hurry to leave after our presentation was over, so we had some of that too.
Everything was delicious, although probably not quite what most Jews would expect. Jewish food with a Swabian twist. 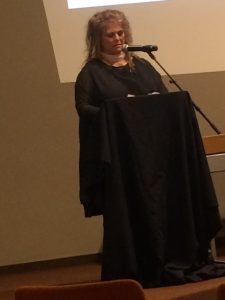 Back when our book tour was conceived and before it seemed even remotely likely that I would be able to stand on a stage and read my part, Iso suggested a church member with acting experience read excerpts from Der Stolperstein in Sarah Stern’s voice.  Corinna Krebs-Haeberlein did a dramatic reading that provided a different emotional depth.  It was a bit of an out-of-body feeling to hear someone reading in my voice! 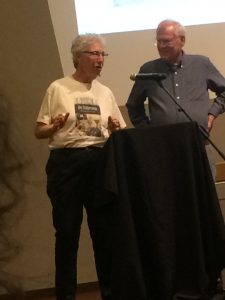 One of my favorite moments of the evening came at the end of our reading and Friedrich Edelmann and Rebecca Rust’s playing. Rudi and Sherry took the microphone and Sherry, a distinguished retired rocket scientist, explained to the audience—with Rudi translating and I suspect adding a few thoughts of his own— what they had been eating. Introduced as Frau Docktor Green, she described the miracle of the oil at Chanukah, the tradition of eating challah on Friday nights and where the jelly doughnuts fit in. The Jews in the village where Sherry’s father’s family were from were all killed by the Nazis.

And now the lost leader

In journalism, when a reporter puts the most important part of a story near the end, they call it a lost lead. Here it is: Rudi asked if anyone had any questions or comments and they didn’t —at least not in front of the group. But while we were signing books, Dieter Bergmann, a friend of Iso’s, told us two stories.

One was about Oskar Dirlewanger, an Esslingen man jailed for raping two teenage girls. He was befriended by a Nazi and founded an SS group composed of hardened criminals. They were responsible for killing 100,000 Jews and others in Poland, Russia and the Ukraine. Dirlewanger was apparently murdered by the Allies at the end of the war. Dieter said no one Esslingen talked about him or knew about him even though it was common knowledge elsewhere, including on the Internet. We asked others at the table with us if they’d ever heard of the SS officer. They had not. 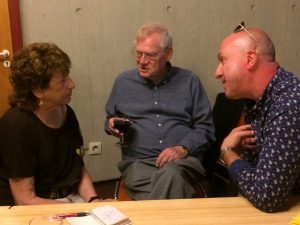 The second story, Dieter’s own, is even more compelling. When we asked him about himself, he gestured to his face and said, “Look at me.” His mother was Jewish and at age 14, she fled, alone from one place to another all through the war. Her grandfather was shot band killed by the Nazis. Although she survived, Dieter said she never really recovered from her traumatic experience and her philosophy was “for every Jewish child killed, five German children should be killed.”
Dieter has been almost the only Jewish person to attend our events. The absence of Jews dramatically demonstrates how nearly successful was the Nazi attempt to exterminate all Jews.

Julie Freestone and Rudi Raab are touring Germany with their book Der Stolperstein. They will have done 15 book events by June 3.