In a recent blog, we mentioned that you can sometimes get a sense of society and its concerns by reading advice columns and Next Door— the online community. Today we’re exploring how the comics do the same. 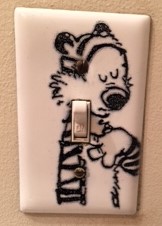 Cartoonist Bill Watterson didn’t allow his strip to be commercialized. This Hobbes light switch plate was at the Half Moon Pumpkin Festival 30 years ago

Years ago, Rudi was a great fan of the Calvin and Hobbes strip. Sometimes, he was so worried about what was happening to the characters that there were standing orders to awaken him as soon as the paper arrived in the morning to find out what was new. When the creator Bill Watterson stopped drawing, Rudi was distraught for weeks. Several gifts of Calvin and Hobbes books comforted him. He continued to read the comics and formed other allegiances.

These days, Rudi reads the newspaper to Julie every morning while she’s doing yoga. Before she gets out of bed, he’s already read the paper, perused the comics and tried to tell her about several cartoons. That doesn’t work out so well; even when she looks at them herself she usually doesn’t quite get them and reading the text isn’t what was intended, so says Julie.

We started to consider how the reality of COVID has affected that section of the paper and other cartoons. And just a word about the blog headline here. We realize that comic strips are not necessarily make-believe. They often provide succinct and biting analysis of what’s going on in the real world.

The Candorville strip started to get with the COVID theme within the last week. Apparently the panels by Darrin Bell are produced with a long lead time and it took a while. Just a few days ago, Candorville— which features young black and Latino characters living in the inner city—had one man wearing a mask and being asked by his girlfriend (not wearing a mask), “Do you think 90,000 Americans would have died if we hadn’t elected a game show host as president?” This is definitely a comment on COVID-19 and the Orange thing managing the country or —not managing the country.

On Saturday two guys in the strip sitting close to each other at a lunch counter are being reminded that what they are doing is not safe. They are apparently shown the door. They complain that the time under quarantine is too much, echoing the sentiment of the lovely armed Right-wingers clamoring for “Liberation”.

Doonesbury, by Gary Trudeau, runs 30-year-old re-runs during the week and new material on Sundays. So a recent week-day cartoon focused on a very dated tobacco-addiction cover-up (yawn). But last Sunday, the comic showed the orange thing losing it verbally, ranting, going off the rails and repeating meaningless sound bites such as “What we’re doing is, like, INCREDIBLE! Like one of the great jobs ever! Like…Like..”People are saying they can’t believe how unbelievable it is!” and “So we’ll have to see, we’ll be looking at it strongly, because it’s so incredible!” Finally his dismayed aides hand him talking points and, with an apparent reference to easing the pandemic restrictions, he proclaims, ”Back up”! We’re like Back up! A lot of people don’t know that!”. Sounds pretty real, doesn’t it?

Most of us are using Zoom in some ways to connect and the comics aren’t leaving out that topic. Bill Amend’s FoxTrot addresses sibling rivalry and generational struggles. A recent one shows a guy standing in just underpants holding a coffee cup. He asks his kids to tone down the noise. “I have a video conference with my boss in a few minutes.” The kid responds,” Dressed a little casual aren’t you?” The dad answers “Don’t worry, I’ll put on a shirt and a tie” Definitely related to the struggle of working from home and all that implies. And many of us don’t have to look at a comic in the newspaper to experience this.

Dilbert is an interesting situation. Scott Adams’ cartoon is centered around office politics, intrigue and weirdness. Except that people who work in offices aren’t there in their cubicles these days in real life. Dilbert’s characters have all been wearing masks for the past week and a half. Everything is office politics as usual except for the masks. We think it is a complicated experiment to only show the top half of the faces when usually at least one of the characters is either totally frustrated or is gnashing his or her teeth. The drawings show that life goes on albeit behind masks.

As a devoted follower of the comics, Rudi notes that unfortunately the rest of the cartoons are reruns (Snoopy) or are firmly stuck in the 1950’s (Blondie) . Great opportunities for social commentary are being missed.

We know we’ve left out the obvious cartoons: political ones that appear usually on editorial pages. Over the history of America, that genre has brought down power brokers, turned the country for or against leaders and created enduring symbols for political parties and public figures. We note them just to be sure you don’t think we forgot about them completely. Of course they focus on the pandemic. What else is news these days?

Rudi Raab and Julie Freestone wrote the novel Stumbling Stone. It’s fiction, just as comic strips are, but the novel is about 90% true; it’s based on their true life stories. As many cartoons are mostly based on true life as well.