When Julie was almost 13 years old, she moved to Rio de Janeiro to live with her father, who was working there. She’d been living in a small town in upstate New York and knew little about foreign affairs. She was startled to discover the Brazilians didn’t like Americans, although the teenagers she met were kind and welcoming to her individually. 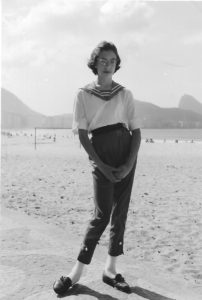 Julie lived in Rio at age 13

Relatively soon, she understood why. When Americans would come from the States and Julie and her father would cross paths with them, they had little good to say about the beautiful city. They disparaged the food, the “natives,” and anything else that didn’t meet with their approval. “Ugly Americans,” Julie soon came to call them; a novel by that name was published that year in 1958.

Rudi’s impression of America back in the day

When Rudi was in high school in Germany, his English reader had little stories about America. All in all it seemed to be a country that was wealthy, powerful and respected. Rudi was young during the Berlin Blockade but saw that the U.S. prevailed over the Soviet Union. In his last hometown in Germany, there was a centrally located modern building called the America House. It hosted cultural events and contained a large library. From afar, America looked like the land of Rudi’s dreams.

What they think of us now

One of DJT’s consistent themes is about how much better the U.S. is doing handling the pandemic. He’s bragged about how we have testing available to anyone who wants it (not true) and that the U.S. has the best testing rate in the world. (Also not true; we are 11th in per capita testing rates)

A few weeks ago, one of our blog readers (we’ll give you credit if you remind us who it was), suggested we write about what people in other countries were saying about how the United States was responding to the pandemic and especially to our leadership. So we reached out across our network and got some interesting answers.

One question you might have is why be concerned with what others think of us? We wonder as well. More than 10 years ago, we went on a bike and barge trip from Amsterdam to Brussels. There were 13 of us, mostly family and friends but two couples were strangers; one from Britain and the other from Canada. George W. Bush was president and all four of them wanted to know why we voted for him. When we said none of us Americans had, they seemed to think differently about us. They were friendlier.

Here is what we learned from our limited non-scientific survey.

Germany has managed to keep their cases and deaths from COVID-19 relatively low. Many Germans credit their leader Angela Merkel. Rudi’s sister, a now-retired Green party senator, was pretty succinct about her feelings about DJT. “He is an embarrassment. It’s amazing that he still has some support in the US. All the world is laughing about him and we Germans respect Putin more than Trump.”

Rudi’s nephew Matthias, who we Skype with each week, says that DJT from the German perspective is so embarrassing that the image of America as a world power has been destroyed. 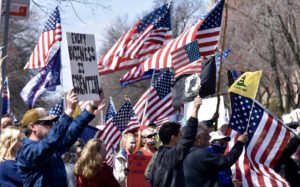 Our friend Nick asked a family in Berlin for their feedback about the pandemic. They said. “People get more and more fed up with the restrictions, for example holding the distance doesn‘t work so well any more in many places like in grocery stores or also if I meet friends we don‘t hug but it‘s hard to keep the 2m distance…actually we get a bit lazy. Really stupid are the demonstrations against the corona rules by even corona deniers or partly right wing people. They should be happy it didn‘t get worse like other countries!”
Julie’s book group friend Evie, who has a wide circle of sailing friends reports, “In general, our friends from Denmark and Germany cannot believe that Trump was ever elected. And the more outrageous he behaves the more unbelievable he is to them. The pandemic is just more of the same behavior. Outrageously unbelievable to them.”

Our friend and neighbor Nel polled her Dutch friends. One said, “I look with amazement and horror at how the pandemic in the US is being addressed. How is it possible that one of the richest countries in the world makes it such a mess? Terrible to see how people who are losing their jobs are immediately uninsured. This should be impossible!! I can be brief about Trump: totally crazy!!! (And not only during this pandemic)”

Another had a different perspective: “Actually, we don’t hear much about the pandemic in the US. Well about Trump’s strange handling of the pandemic. Such as: that there are many unemployed who need to be supported through food banks, that the colored (sic) population receives little or no medical help and cannot survive financially. So basically we hear the highlights”.

Nel’s family member said, “We have the impression that Trump does not know what he is doing. It is a swing policy between the pandemic and the economy. It is a policy without consistency and vision. Everyone is to blame except him. The United States government has seriously underestimated the entire impact of the pandemic.    Nel’s brother said, “I am happy that I am allowed to live in the Netherlands, among other things, with regard to medical expenses. Our impression is that Trump is going crazy and does not have any control over his own behavior. If there are people around him who show insight and rationality, they will be fired in no time. In short, the government consists of followers and populists. Riots and quarrels rule everything. There is no question of a consistent policy. I think it a very scary idea that the most important nation in the world is led in this way.”

From a Dutch home exchange friend, Nel reports, “Apparently, Mr. Trump lives in a different reality than the world is in. In addition, he always adjusts reality as it suits him best. One reality is that half America is disappointed and perhaps angry given its own bad situation. Mr. Trump makes good use of that. He is a crafty politician with very little interest in a better world for all.” (Thanks to Nel for the translations)

Nel also asked a friend in Australia, who said, “It must be terrible to be living in a beautiful country like America watching decency be torn apart at the seams. All of my friends share my view that Trump is a dangerous narcissistic psychopath who should not be anywhere near a seat of power. Watching the disarray and the unnecessary loss of life, particularly amongst the disadvantaged, in cities around the country is horrifying. In contrast our politicians have worked together to ensure our safety here. Our health system is fair and efficient. We have had less than 100 deaths. We could have done better but we hope to manage the rollback carefully. There you have it!

And another report from Australia from our friend Margaret: “I also heard from my nephew’s wife in Perth, Australia. Their kids are going back to school and the virus seems under control, as it is in New Zealand. They’re worried they won’t be able to make their annual trip to California in December because the US has screwed up so much.”

And now to France

Mark Greenside, author of (not quite) Mastering the Art of French Living, lives in the Bay Area and has a home in France. He said, “I hear regularly from French people who are more than dismayed about Trump—they’re incredulous that (1) he was elected and (2) he continues to have the support of a large number of Americans and (3) that he could actually win again. They express objections to his words, actions, thoughts, language, and demeanor. He is viewed as selfish, arrogant, stupid, and mean—and as such is a world and human threat. Indeed, Lancet (which is an English medical journal) recently recommended getting Trump out of office and replacing him with people who know something, and they frame their article as a health article: the world’s health depends on getting rid of (Trump).”

Mark says he also hears from people in Hungary and Poland, who have their own leadership problems. The people I know in both countries are not happy with their governments, but are VERY happy they don’t have ours.

Ending on a humorous note

Nate White, a British writer is alleged to have said this about Trump (thank you Margaret). “Plus, we like a laugh. And while Trump may be laughable, he has never once said anything wry, witty or even faintly amusing – not once, ever. I don’t say that rhetorically, I mean it quite literally: not once, not ever. And that fact is particularly disturbing to the British sensibility – for us, to lack humour is almost inhuman. But with Trump, it’s a fact. He doesn’t even seem to understand what a joke is – his idea of a joke is a crass comment, an illiterate insult, a casual act of cruelty.”

But being an elected official apparently doesn’t prevent every politician from seeing the humorous side of our current crisis. In Lund, Sweden, Mayor Phillip Sandberg found a unique way to keep thousands of people out of the city park where they normally celebrate Walpurgis, the holiday that welcomes longer, warmer days. He had public work crews spread chicken manure all over the park grass. He agreed it would probably smell dreadful, but he said, “We don’t want Lund to become an epicenter for the spread of the disease.”

Rudi Raab and Julie Freestone did a book tour with the German version of their book Stumbling Stone. They were greeted warmly wherever they went and no one seemed to dislike them for being American. That was in 2018 after DJT was president. Most people seemed to understand they hadn’t helped to elect him. And one last word: Karen Pollak, who is acting as a editor on these blogs, says her Canadian relatives think  DJT is “an awful, bombastic jerk.”