For those of you who have been following this blog about our German book tour, you know that from April 25 when we left California until we returned on May 21— unexpectedly because I needed eye surgery —we’ve had a series of adventures. 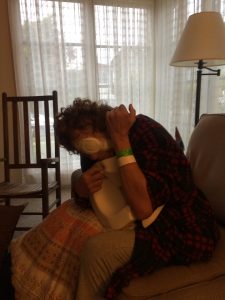 In almost every one of the 12 places we had book events; we heard compelling stories and met inspiring people. And even when we stopped somewhere along the way, we encountered sights and information we never expected.

Almost from the time we landed in San Francisco on Tuesday May 20 until I was discharged from the hospital after eye surgery, there was one medical encounter after another to confirm the German doctor’s detached retina diagnosis, explain the surgical options, prep for the procedure and have the retina reattached.

But I did find time to squeeze in a very unlikely encounter. During the pre-surgery procedures, I felt as if I were in a spa. I had a flannel gown with matching socks, a blanket that puffed up with warm air, lots of attention, many questions and visits from members of the team that would be working on me.  And one nurse, with a soft Southern accent who spent the first two hours attending to me. He had spent eight years touring with Little Richard,  a well known rock and roll star, all over the U.S. and in Europe. He showed me a photo (I couldn’t see because of my eye problem)

Then he talked to me about the transition from his life in a small town in a conservative part of the U.S. to California.  It’s been difficult, he admitted. People aren’t’ as friendly.  Even the church he belongs to hasn’t been a source of warmth. His wife, a stay-at-home mom, has tried to make friends, but it hasn’t happened.  Even the home schooling community hasn’t been the same as it was back home.

He also confessed that he felt vulnerable in California because of the restrictions on guns. In the state he came from, being armed was part of the culture. Everyone had a gun and he suggested that the reason the crime rate was so low there was because no one would break into a home if you knew the owner had fire power.

He said, softly, that he was sure in a just a short time, “They’d be taking all of our guns away.” I pointed out there was the second amendment and that courts haven’t really upheld any efforts to strip people of firearms (I’m not sure that there actually has been an effort to do that). I also said I thought that per capita, there were probably as many guns in this state as there are elsewhere.  It’s just more difficult to get them.  He simply repeated that he was sure owning guns would soon be a thing of the past.

Before the surgery, the doctor had emphasized the importance of me holding still while he worked on me. Ninety minutes is a long time to hold still.  I developed a list of things I could think about:  ideas for this blog, menus for Rudi to cook while I recovered, a mental run through of the yoga exercises I wouldn’t be allowed to do after the surgery. (I rejected this last option, fearing that I might start actually moving my arms and legs to mimic the poses)

The pre-op conversation with the nurse gave me enough to think about so that the surgeon actually complimented me for remaining still.

Little Richard and Chuck Berry? Who expected to meet them while I was in a flannel hospital gown?

Julie Freestone and Rudi Raab had been touring Germany with their novel Der Stolperstein (Stumbling Stone). They have a few more blogs from the trip to share in the coming days.