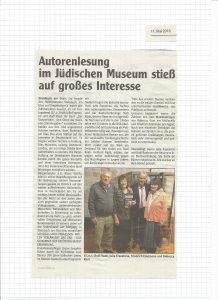 As a former reporter and public information officer, I’ve created a lot of publicity including press releases and other written material. I’ve trained a range of people on how to work with the media. I’ve helped subject -matter experts develop talking points to insure their messages got into the story.

It’s been interesting to be on the other end of the equation on this book tour. We had some modest media coverage in the U.S. with our America Stumbling Stone novel. We did a few radio shows, several print media interviews and probably some other things we’ve already forgotten. Those activities began when the website for Stumbling Stone was launched and then when the book was published in June 2015 and continued at a low level for the next two years.

In Germany with Der Stolperstein, the German version of the novel, we did issue a press release when we launched its website but we got no response. And probably because we didn’t know what we were doing. And we gave press releases to each book tour event sponsor. For whatever reason, here on our book tour, there has been a reporter at almost every event, no matter how small the town. And we’ve already seen some of the stories.

Of course, I don’t speak German, so there’s no way for me to be sure our important messages are communicated. When Stumbling Stone was published, we developed talking points and did some role playing before we were interviewed. We thought about hard questions we might be asked and what our answers should be.

We didn’t do that for the German book tour because it didn’t occur to us that we’d need them.

In Altenkunstadt, a town of 3,000, the reporter asked if we had a press release. Yup, we did. But not with us. We had sent them to each event organizer. And our mind, the intent was to publicize our readings so there would be enough people at them.

In Julie’s professional life, she never left home for an event without a few copies of the press release just in case a reporter was assigned to cover a story who knew nothing about the topic It happened to her more than once when she was a reporter. And more than once when she gave her press release to someone covering an event, much of the story that was published included her messages.  That’s happened here too

The most recent article in Bosco Nach(t)kritik from our Gauting event calls our story “boy meets girl.” It is a romance for sure, but I figure that if Rudi and I were a boy and girl when Sarah and Karl meet in our novel then we must be in our mid-forties by now/ That’s good news and maybe we’ve found the fountain of youth?

Calling it an exchange of free talk and reading, a personal story, the reporter on that story, Sabine Zaplin, had some really nice descriptions of our talk. She described the slides we use as “just as if one opened a family album” It’s an apt description because indeed, many of the photos have actually been taken from the albums of our families. Julie’s father was an avid amateur photographer and made family members pose for hours, as did Rudi’s father.

Zaplin also described the role the musical portion our presentation plays by saying “They (cellist Rebecca Rust and bassoonist Friedrich Edelmann) insert themselves into the dialogue between Julie and Rudi as a “musical answer. She interviewed an audience member who said she was very moved because we have a special warm-hearted humor.” We do try to inject humor into the presentation.

Not everyone focused on the romance. The reporter for Obermann-Tageblatt at Altenkunstadt called our event a “a discovery trip into the brown time,” presumably a reference to the Nazi brown shirts. “A remarkable story about young German who refused to submit to the Nazis.” The reporter said the audience was most interested in why Gerhard wasn’t saved. “The young man who the Nazis wanted to silence was given a voice.”

Musician Friedrich Edelmann, who with his wife Rebecca Rust (cello) is doing the tour with us, also says important to mention Dr. Karl-Georg Berg; the head of the feuilleton of RHEINPFALZ – Section Landau/Pfalz who did a large write up with photos.  And then there was the coverage in FOCUS Online; Friedrich says Focus is next to “Der Spiegel the biggest serious weekly magazine in Germany. Oh my.

What does this all come down to? At the least, it is gratifying that the media are finding the story worth writing about. And every person who reads the newspaper is another person who hears Gerhard’s story.

Julie Freestone and Rudi Raab are driving through Germany on a book tour for Der Stolperstein, the German version of Stumbling Stone. They are not being followed by the media but they are pleased with the coverage they are getting.