Years ago, our niece Paula gave us a set of Yiddish greeting cards. One said, “Man plans, God laughs.”

We spent many many hours planning our German book tour. Friedrich Edelmann and Rebecca Rust, our musician buddies who did most of the book events with us, spent at least as much time. 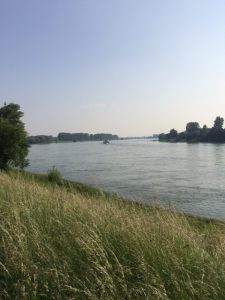 And all that work was paying off. We’d done eleven events with four more to do when I realized I couldn’t see out of my left eye. We were staying at a lovely hotel in Dusseldorf with a glorious view of the Rhine River. Rudi had gone to a festival with his nephew and his family. I took a walk along the river.

So, I called my friend Janet, who lives in rural Nevada using WhatsApp—free calls unless, as she pointed out, you have a limited data plan and exceed the allowance. I mentioned my eye issue rather casually at what I thought was the end of our conversation.

She admonished me to get help immediately, which seemed like a good plan, especially since Rudi was at the festival with a nurse and two doctors. Rudi and his nephew came racing back to the hotel in a cab. Apparently, Matthias told the cab driver “This is a blue light situation.”  (Ambulances, police cars and fire engines have blue lights).  The driver said he didn’t have a blue light, but he did drive about 70 miles an hour.

We went off to the nearby university hospital eye emergency clinic in our rental car. Matthias knew the huge campus well. He explained that with two young children, he’d made a number of trips there.

We were the only ones in the waiting room. It was almost 10 p.m. on a holiday weekend. The young doctor— even Matthias commented that he looked no older than 14—did a thorough examination and Rudi and Mathias translated anything he couldn’t say into English. 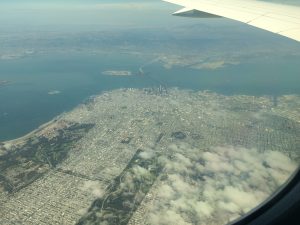 Coming in for a landing at San Francisco International airport

“I’m sorry to tell you that you have a detached retina.” His face looked regretful. He said they would schedule surgery for the next day. We asked him all kinds of questions, including what would happen if we waited and went home to address the problem.

He called his supervisor, a very dignified well-dressed surgeon who appeared within less than 30 minutes and still seemed pretty young — about Matthias’ age—but a professor at the University’s medical school nonetheless. He did another examination, confirmed the diagnosis and patiently answered all questions.  Matthias had a lot of good ones.  When I asked whether the surgery strategy that was being recommended was the gold standard—since I thought some people in the U.S. had been treated with other approaches—the younger doctor looked startled that I would dare to question so august a presence. But the senior physician seemed fine and said yes, his approach was considered the best one. It was after all, a university hospital.

We’ll leave out the part about trying to call Kaiser for authorization and guidance. Let’s just say that of all the things we love about Kaiser, this wasn’t one of them. Not even close.

In the end, we decided to go home. The recovery process was too long for us to live out of suitcases.  Four days in the hospital and then follow-up visits and being still for at least a week and not being able to fly for at least three weeks. Finding a place to stay would have been a challenge, although it was suggested that if we had no place to stay, Rudi could also be admitted.

And although the Kaiser bureaucracy didn’t respond well, as usual, their medical response was terrific. We got off the plane at 2:30 p.m. Monday. I have a doctor’s appointment at 8:15 and surgery at 12:15.

So, our glorious book tour, with the fascinating insights, people, candy, flowers wine and enough experiences to last a life time, comes to an end. There will be a few more blogs.  Stay tuned.

Julie Freestone and Rudi Raab have been touring Germany with their book Der Stolperstein. They are returning to the U.S, filled with amazing experiences, tons of German food and much gratitude for everyone they met and everyone who supported them.