We don’t spend much time in our house talking about science. Or rather we didn’t. We just took it for granted. What was there to talk about? We know the earth isn’t flat. They’ve sequenced the human genome. Miraculous things seem to happen every few months. There’s a space station out there with people living in it and rockets taking off to provide food and equipment.

It seems amazing that governors like Andrew Cuomo and Gavin Newsom have to keep repeating at their news conference that their decisions about how to protect their residents will be made based on science and fact. Huh? What else would you base such momentous judgments on? Crystal balls? Hope? Delusions? It seems obvious, but apparently it must be repeated. Again and again. 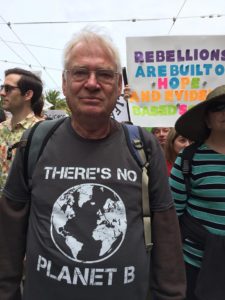 In 2016, the National Security Council finished a 69-page guide — officially called the Playbook for Early Response to High-Consequence Emerging Infectious Disease Threats and Biological Incidents. The project was driven by career civil servants as well as political appointees, aware that global leaders had initially fumbled their response to the 2014-2015 spread of Ebola and wanting to be sure that the next response to an epidemic was better handled. According to Politico, the Trump administration was briefed on the playbook 2017 but failed to follow it during this pandemic.

It seems bizarre that an already-developed plan based on solid information and science wasn’t followed.

Some issues worth considering.

And yet, there are some issues here that are probably worth exploring. First is the problem that not a lot is known about this virus. And some of what we know now seems to contradict what we might have been told at the beginning (for example, should we be wearing a mask?). This isn’t a new issue. Over the years, there has been conflicting information about things that were good/bad to eat. Is butter really bad for you? Should you eat margarine instead? How much meat is too much? Should you drink eight glasses of water every day? A small minority of people – thankfully – argue that vaccinating children is dangerous.

Most people are understanding about the lack of information at the beginning of a crisis. They understand that scientists are literally working around the clock to try to get answers to how the virus spreads, how to stop it from attacking the human body, what kinds of drugs could be effective in treating the disease.

But some people take the lack of information or the changing data as a sign that none of the science has any value. They dismiss the advice of experts. It’s bad enough when those people are neighbors, or friends or family. It is unacceptable and dangerous when they people are in positions of leadership (like Governors, mayors or the President). And it isn’t just about the current pandemic. Consider what some have say about climate change not being impacted by human actions, despite compelling facts. And this isn’t happenstance; industries like big tobacco and fossils fuel companies spend millions to help people dismiss the facts.

Another issue has to do with “grasping at straws.” Yes, we’d all like to wave a magic wand and know that there is a vaccine that will stop the spread of the virus. And we’d all be delighted if a drug appeared, preferably today, that would prevent people from dying from COVID-19. But respectable health experts have repeatedly and credibly said neither of those solutions exists now. And neither is likely to immerge in the next few weeks or even months. In fact, according to Eugene Robinson writing in the Washington Post It took four years for the fastest ever vaccine to be developed—for mumps. 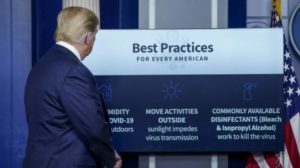 So again, it is unacceptable and horrifying to hear someone in authority promote a drug that has been proven to be ineffective or to make offhand suggestions about possible solutions (seriously, drink bleach?) that could harm or kill someone. Misinformation and rumors spread rapidly through social media, without having help from people in positions of power.

Julie went to the Bronx High School of Science (from which no illustrious career resulted) and worked for a public health department. She doesn’t consider herself an expert in science or public health. And yet most of us know one person or more who often sounds like an expert on the subject of masks, immunity, herd immunity and other terms we didn’t know about six months ago. Not to say everything those newly minted mavens say is wrong. It’s just important to be cautious about who says what and what we believe.

In the same article by Eugene Robinson, he points out that new COVID cases, hospitalizations and deaths are continuing to rise across the country. And The New York Times reported Tuesday that an internal Trump administration estimate predicts daily COVID-19 deaths nationwide could rise to 3,000 by the beginning of June, roughly twice the daily toll right now. Also, the rate of the virus outbreak is increasing in rural areas of the country, the very places that demanded restrictions be eased.

That data should be driving the decisions about whether the economy should reopen; the unemployment rate and the stock market should not control what opens.

On the other hand, it should be obvious why respected health experts’ advice is being ignored: armed protestors in capitols across the country; business owners defying shelter-in-place orders; corporate executives pressuring those in power to open up; people lined up for hours for food; unemployment numbers mounting every week. From a political point of view at least, that is all a disaster.

A ray of hope?

DJT did reverse his decision to disband the Corona virus Task Force. That’s the good news. The bad news is that he didn’t say he and the country needed their expert advice. He said he had “no idea how popular” they were. And he said their mission would be changed in the coming days. Is there anything to say about this?

If science proves more trustworthy than emotion, and testing and tracking can’t catch up and projections prove right, it will be cold comfort to for those of us rooting for rational decisions to say, “We told you so.”

Rudi Raab and Julie Freestone supported a march to defend science. How quaint. What will we have to be marching for next year?