How I learned gratitude and patience. Sort of

Since many of you have been wonderful about asking how I’m doing, let me start by saying that I am grateful that after I was diagnosed with and treated for a detached retina, I am more than grateful that:

– I didn’t have to spend eight weeks in Germany, where we were when the condition occurred, waiting until it was OK to fly home

– I didn’t have to spend weeks face down in a prone position waiting for the retina to heal, or whatever retinas do after they’ve been addressed through surgery 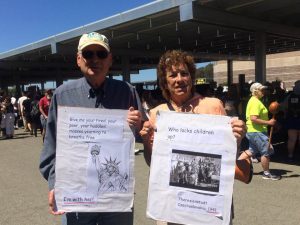 Demonstrating was not forbidden (I didn’t ask)

– After a mere week or so, my doctor agreed that daily walks were OK, reading was fine and most other activities of daily living were acceptable. Participating in demonstrations to protest separating parents and children at the border was not forbidden.

So remember I said how grateful I am. That said, six weeks into my recovery, I would like to share how it feels to have a black blob bouncing around in my left eye. It’s my steady companion. It’s descended so that it is only on the lower eighth of the eye – I guess that statement belongs above under things that make me feel grateful. But it’s hard to say I’m grateful for a black blob bouncing around in my eye. Continually.

The blob is the nitrous oxide gas bubble that was inserted into the eye during surgery. It’s there to I think keep the retina in place and, according to Rudi—who is a doctor, but it’s a PhD in medieval German literature— it’s there to keep the curve in my eye. I get why it needs to be there and everything is apparently proceeding as it is supposed to according to my ophthalmologist, who is probably more than 21 years old but certainly doesn’t look it.

Just to digress. My doctor did not roll his eyes when I asked a bunch of questions each of the four times I’ve seen him. For example, he told me cooking the first week was a bad idea: I couldn’t see, could cut myself and have another medical emergency or squirt something into my eye.

He did patiently point out that he couldn’t address every contingency and that common sense would help me decide whether I could lift a cast iron frying pan (it’s big and heavy) or do yoga (no inversions he said each time, but yes). I asked about driving early on and last time. He pointed out people with one eye do have drivers’ licenses. That said, common sense tells me that driving with a bouncing black blob isn’t the best idea.

I asked about bowling (not that I do that more often than once a decade but we had given my son and his wife a certificate to bowl with us and it was expiring). After mimicking throwing a bowling ball, he shook his head. Too strenuous? Too much stress on the eye? He didn’t explain.

He also didn’t roll his eyes or even react when we asked about sex. Positioning is important to healing from the surgery. I can’t be on my back, or do inversions and at the beginning, I couldn’t be on my left side. All he said at first was no and then, “gentle.” I bet he had a good laugh with his other 14-21 year-old specialists and medical colleagues about the old geezers asking about that.

I did start out to explain how this how process has helped me find happiness and patience or something like that. On the way home from the German emergency room after the diagnosis and right after our decision at midnight to go home immediately, Rudi’s nephew said he couldn’t believe how calm I was. Rudi has told me several times what a “trouper” I am.

I think that’s because I am not complaining. (See above about what I’m grateful for). It could have been worse. We could be in an expensive hotel room in Düsseldorf, Germany, with our two suitcases, two backpacks and boxes of books— and the bouncing black blob.

Thank god it’s baseball season and the Giants are only two and half games out of first.

Julie Freestone and Rudi Raab were frantically touring Germany with their novel Der Stolperstein (Stumbling Stone) when they were forced to flee so Julie’s eye problem could be addressed. Rudi is now translating the blogs they wrote on that trip into German.