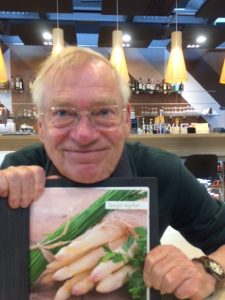 Since we started our book tour at the end of April 2018 for our novel Der Stolperstein, we’ve been blogging almost every day about our mind-boggling experiences. We’ve gotten enough feedback to keep us going. Some people have told us how important our work is. Some of you have shared stories of your own. Our blog about Spargel and the German’s love of that vegetable we call asparagus elicited enough comments that we thought we’d share them.

When we ended that first blog with Rudi’s light-hearted comment, “What would Freud say,” I imagined my cousin Peter in Vermont commenting. He didn’t disappoint with this very first response we received: 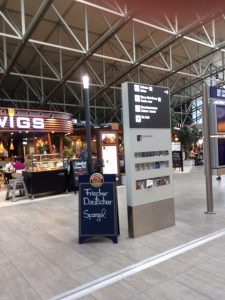 Even the airport participates in the Spargel mania

Certainly your somewhat indifferent attitude toward Spargel (spell check wants to make it “sparkle”) has Freudian significance.  Do you want to talk about it?  I have special low fees for friends and family when we do therapy.  (Don’t take that too seriously — I’m sure you won’t.) Anyway, we have been eating it from our garden three or four times a week.  I really enjoy it.  (What does that say about me????)” (Peter Burmeister, M.A.
Individual Depth Psychotherapy, Organizational Psychology)

“I’m enjoying all of the blogs but this one resonated in particular because several years ago Torie and I were visiting friends in Hemmingen…and it was the cusp of the asparagus season. My friend Holly suggested that we go for a drive to find a stand. Drove for miles and miles, no asparagus stands. Holly then says that we’ve driven so far, we should continue on to see the town of Hamlin, which was wonderful. On our return, she suggests that we stop at the grocery store and see if we can find the asparagus there. We enter the store, and what greets us? Mounds of white asparagus AND a special machine (4’x5’ or so, maybe a foot or two wide) that peels the asparagus! The stalks get fed into one end and come shooting out the other, all ready to be cooked. We found this to be both amazing and hilarious. But I must confess, I like my asparagus green, exposed to the sun and loaded with chlorophyll! (Gail Burmeister)

Loved it! Both the story and the Spargel. My Spargel story – actually my mother’s. My father’s best friend met and married a German woman named Gail during the war (or maybe at the end). Gail introduced my mother to asparagus and taught her how to prepare it. An important part of the preparation was to soak it for two hours to be sure all the dirt was off. My mother did that for years before she realized she wasn’t harvesting asparagus and didn’t have to worry about all the dirt. (Joan Edelstein)

Hee hee. I LOVE asparagus. Or “spear guts” as I call them (the soft inner parts of spears). Now ‘tis the season here. Still chuckle at the pee smell. And speaking of Freud:  I once was inebriated enough to shake a limp spear at colleagues while making a “mark my words” point. They got it.  (Sharon Hawley) 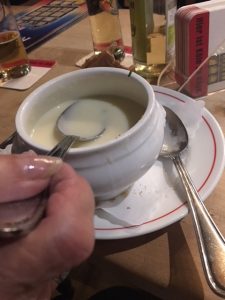 Oliver sent this photo of spargel soup from Cologne, Germany

Spargel und Rhubarb, a Haiku:
First fruits of spring
A precursor of fresh veggies to comePumpkin squashes the glory
And we hunker down for the asparagus reappearance.
(Oliver Pollak)

never heard of that

had a neighbor growing up in Brooklyn who peeled tomatoes (Michele)

I think Rudi’s on to something. I can live through the whole season and never buy a bunch. Speaking of peeling the stalks instead of throwing them away like we do, I saw a chef on TV peeling the stems of broccoli and saying his boys enjoyed that more than the flowery tips.  Hum.  (Donna Cummings)

Rudi Raab and Julie Freestone continue sharing experiences and observations from their recent book tour in Germany with their novel Der Stolperstein. The tour ended prematurely when Julie had to have eye surgery but the blog will continue for a bit.